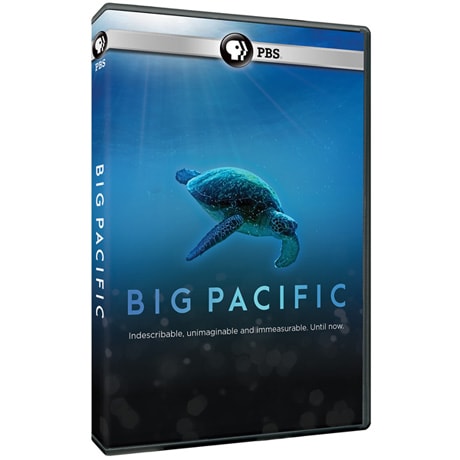 $29.99
1 Review Write a Review
Item #: WA7622
Big Pacific The Pacific Ocean covers one third of the Earth's surface. It is larger than all Earth's land combined, holds half of our world's water, and hides the deepest place on our planet. It is a place   END_OF_DOCUMENT_TOKEN_TO_BE_REPLACED
Add to Wish List

NATURE: What Plants Talk About DVD

How We Got to Now with Steven Johnson

Big Pacific The Pacific Ocean covers one third of the Earth's surface. It is larger than all Earth's land combined, holds half of our world's water, and hides the deepest place on our planet. It is a place where huge and iconic, rare and dazzling creatures live - and where creatures yet to be discovered lurk. The Pacific sees the most violent storms, creates the most powerful waves, and is powered by the strongest currents. It boasts the largest coral reefs and the richest kelp forests. Its submarine landscape plummets from sea grass prairies to the ultimate abyss, and its tropical seamounts starkly contrast with its massive ice floes.

BIG PACIFIC breaks the boundaries between land and sea, moving throughout the Pacific Ocean to present a broad range of locations, species, natural phenomena and behaviors. Each episode focuses an iconic characteristic of the Pacific: Passionate, Voracious, Violent, and Mysterious, to weave stories from across the Pacific that illustrate the multi-faceted character of this ocean.

There is plenty of food in the Pacific Ocean, but it is the challenge of finding that food that drives all life in the Pacific. In the Voracious Pacific every mouthful counts. In the Passionate Pacific, the quest to multiply has spawned a stunning array of unusual behaviors and adaptations. There are forest penguins with a tenuous marriage, the secret rendezvous of great white sharks, and the tale of male pregnancy.

Surrounded by the Ring of Fire, the Pacific Ocean is the epicenter of natural mayhem. In the Violent Pacific creatures must choose whether to avoid conflict…or rise to meet it.

Man has explored land, the ocean's surface, and large parts of the solar system…and in the 21st century we are just beginning to explore the depths of the Pacific Ocean. We yearn to unravel the Mysterious Pacific…but she does not give up her secrets willingly.

Filmed in cinematic 4K, BIG PACIFIC breaks the boundaries between land and sea to present the Pacific Ocean in way never seen before.