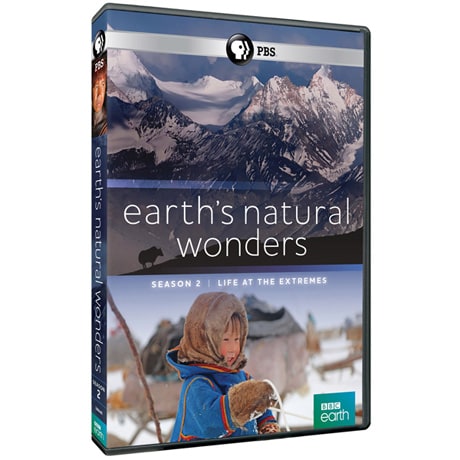 Earth's Natural Wonders: Season 2: Life at the Extremes Earth's Natural Wonders visits areas in the natural world that exist on a breathtaking and massive scale, from vast mountain ranges to impenetrable rainforests and dazzling tropical islands. For human beings, survival within these extraordinary places can pose great challenges to be solved only by human ingenuity.

Surviving the Extreme: Earth's natural wonders are among the most extreme places to live on the planet. From soaring mountains to deep jungles, and frozen polar worlds, human beings need bravery and ingenuity to survive within them.

Surviving with Animals: In many of the world's most extraordinary natural wonders, wildlife holds the key to survival for the people who live there. But even there, animals can be foes, as well as friends.

Surviving Against the Odds: In some natural wonders, people must push themselves to the absolute limit in order to survive. For the people who call these extraordinary places home, survival requires great skill, determination, and courage.