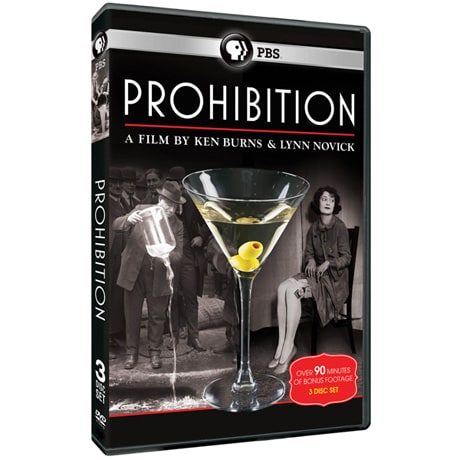 $39.99
54 Reviews Write a Review
Item #: WA7772
PROHIBITION, directed by Ken Burns and Lynn Novick, tells the story of the rise, rule and fall of the 18th Amendment to the U.S. Constitution. The film starts with the early history of alcohol in America and examines the 19th-century temperance and progressive movements through the repeal of the 18th Amendment in 1933. This 6-hour, three part documentary also includes END_OF_DOCUMENT_TOKEN_TO_BE_REPLACED
Add to Wish List

PROHIBITION, directed by Ken Burns and Lynn Novick, tells the story of the rise, rule and fall of the 18th Amendment to the U.S. Constitution. The film starts with the early history of alcohol in America and examines the 19th-century temperance and progressive movements through the repeal of the 18th Amendment in 1933. This 6-hour, three part documentary also includes over 2 hours of bonus content.

PROHIBITION, a three-part documentary series, directed by Ken Burns and Lynn Novick, explores the extraordinary story of what happens when a freedom-loving nation outlaws the sale of intoxicating liquor - and the disastrous unintended consequences that follow.

This utterly relevant cautionary tale raises profound questions about the proper role of government and the limits of legislating morality.

When the country goes dry in 1920, after a century of debate, millions of law-abiding Americans become lawbreakers overnight. Here are the stories of the petty whiskey-jobbers, big-time bootleggers, and brutal gangsters; the flappers who danced the Charleston in New York speakeasies; and the families who stomped grapes in basements and made moonshine in backyards. But beyond the cocktails, this is a darker story about what happens when lobbyists divide the country with wedge issues; the contempt unleashed by smear campaigns; and the perils of unfunded mandates.

By the 1930s, the ""Noble Experiment"" has bitterly divided the nation into wets, drys, and hypocrites. In 1933, with the country in the throes of the Great Depression, Americans have finally had enough - and rally to repeal 18th Amendment and put an end to Prohibition.

"This constitutional attempt to ban alcohol was a failed experiment, as you know if you've ever seen a gangster movie or if you've made any recent visits to a bar, restaurant or sporting event. But you may not know what prompted Prohibition, how it got passed and repealed, and what its failure tells us about the limits of government control. Few people have ever been able to impart those kind of lessons in more entertaining fashion than Burns." - Robert Bianco, USA TODAY, September 9, 2011

"There's no denying that ""Prohibition," is absolutely terrific and perhaps the best film yet by Burns and his collaborator, Lynn Novick." - David Wiegand, SAN FRANCISCO CHRONICLE, August 2, 2011

"If you like 'Boardwalk Empire,' you won't want to miss Ken Burns' intoxicating documentary about this aspect of 1920s America" - Jeanne Jakle, SAN ANTONIO EXPRESS-NEWS, September 11, 2011

"One of prolific filmmaker Burns's best, this is highly recommended." - Video Librarian, Nov/Dec 2011

"There is in these 5 1/2 hours, breathtaking in their scope and detail, nothing approaching a dull moment" - Dorothy Rabinowitz, The Wall Street Journal, September 30, 2011

"…Absorbing. Mr. Burns and Ms. Novick, commendably, don't beat you over the head with the obvious lessons for those today who would legislate personal behavior; they largely let the story of Prohibition speak for itself." - Neil Genzlinger, The New York Times, September 30, 2011

"The assurance and fluidity of the filmmaking on display in 'Prohibition' are a marvel. Style this good doesn't just serve content, it shapes and interrogates it." - Mark Feeney, Boston Globe, September 30, 2011