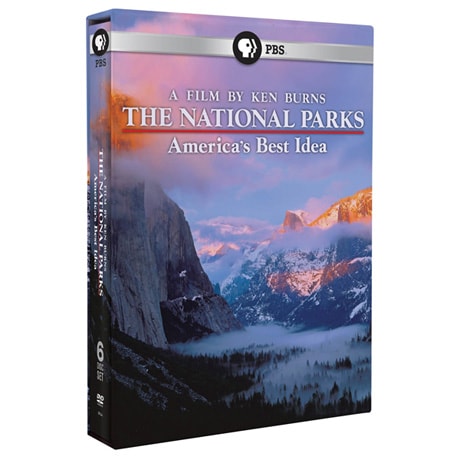 No Reviews Write the First Review
Item #: WA7822AV
The National Parks tells the human history of five of the nation's most important and most heavily visited National Parks (Yellowstone, Yosemite, Grand Canyon, Acadia, and Great Smoky Mountains) and the unforgettable Americans who made them possible.
Add to Wish List

The National Parks tells the human history of five of the nation's most important and most heavily visited National Parks (Yellowstone, Yosemite, Grand Canyon, Acadia, and Great Smoky Mountains) and the unforgettable Americans who made them possible.

Disc One - The Making of The National Parks

Disc Four - Outtakes (An Interview with Nevada Barr, author and former National Park Service ranger; and The Boss, the story of Frank Pinkley and Casa Grande. Narrated by Ken Burns);

Disc Five - The National Parks: This Is America (Mini Documentary);

"…a strong candidate for the most beautiful program ever to air on American television." - Orlando Sentinel

"Better make those park reservations now. The country's most famous documentarian is hoping to do for the national parks what he did for its battlefields after the airing of his landmark PBS series "The Civil War"" - Martin Miller, LOS ANGELES TIMES

"The National Parks, America's Best Idea" - which is scheduled to be shown over six nights on PBS in the fall - is stunning and restorative, like the parks themselves."" Timothy Egan, NEW YORK TIMES

"Burns hears America singing. He is a veritable Fourth of July parade humming in tribute to the philosophy of Thoreau, the idealism of Thomas Jefferson and the eye of Ansel Adams. The baby-faced filmmaker is a big brass band noodling the theme of democracy." - Joanne Ostrow, DENVER POST