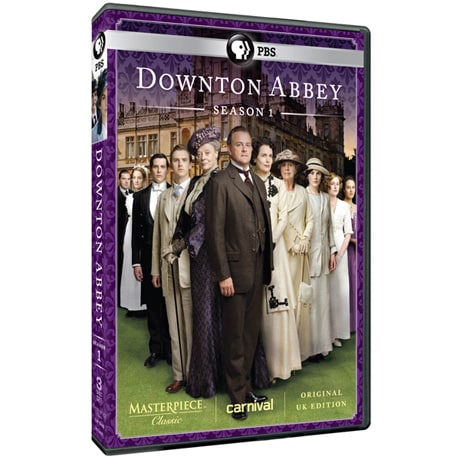 $34.99
1334 Reviews Write a Review
Item #: WA7932
A star-studded cast (Dame Maggie Smith, Hugh Bonneville, Elizabeth McGovern, Brendan Coyle, Dan Stevens) round out the glittering, gossipy, and beguiling men and women of this epic tale! After a tragedy at sea claims the life of the presumed heir, Lord Crawley is faced with the possibility that the house he's loved his whole life might someday belong to a END_OF_DOCUMENT_TOKEN_TO_BE_REPLACED
Add to Wish List

After a tragedy at sea claims the life of the presumed heir, Lord Crawley is faced with the possibility that the house he's loved his whole life might someday belong to a distant cousin he's never met. But before that can happen he must deal with his scandalous daughter, Lady Mary - considered by many to be the rightful heir to Downton. Even the staff has opinions on the family's affairs. And while most are devoted to the Crawleys, there are others whose selfishness and scheming do more than simply disrupt the well-oiled inner workings of the estate. As the servants' mischief escalates, even the most faithful employees begin to imagine a different life.

Pitting hundreds of years of British aristocracy against the tides of social upheaval and technical progress, under the looming shadow of World War I, will the fate of Downton and its family - above and below stairs - be resolved? Or will life be altered so dramatically that its master no longer matters?

New episodes of Downton Abbey will return in Winter 2012

Bonus Features include
- Making of Downton Abbey
- A House in History

This DVD is the original and unedited UK version

This DVD is Region 1 coded (US)