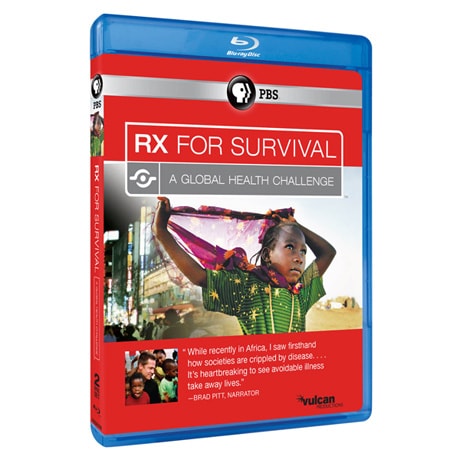 No Reviews Write the First Review
Item #: WA8562
Rx for Survival : A Global Health Challenge At the dawn of the 21st century, the health of the world is at a critical crossroads. Malaria, tuberculosis, and other diseases virtually eliminated from developed   END_OF_DOCUMENT_TOKEN_TO_BE_REPLACED
Add to Wish List

At the dawn of the 21st century, the health of the world is at a critical crossroads. Malaria, tuberculosis, and other diseases virtually eliminated from developed countries routinely claim millions of lives in developing nations. More than 40 new or emergent diseases like Ebola fever, SARS, West Nile virus, and avian flu have appeared within the last 30 years. Strains of "superbugs" resistant to our best drugs mystify modern medicine, while HIV/AIDS still lacks a vaccine and continues to ravage the world.

Yet the problems of global health are not without solutions. During the late 19th and 20th centuries, a "golden era" in medicine spurred the greatest health revolution in human history. Powerful vaccines and antibiotics, clean water and sanitation, proper nutrition and a strong public health infrastructure protected whole populations from infectious disease and increased average life expectancy, especially in developed countries. But the benefits of this revolution have not reached everyone. Infectious diseases that are curable still persist, and deadly new killers are on the rise. In a globalized world, communicable diseases can travel anywhere in a matter of hours.

Why has it taken so long to avert a health crisis that has been preventable for decades? What will it take to get the benefits of medical science and the strategies of disease prevention to all the world's people? Filmed in over twenty countries and narrated by actor Brad Pitt, Rx for Survival: A Global Health Challenge looks closely at the most critical health threats facing the world today. This six- part documentary series presents the compelling stories and real-life drama of those who are proving that solutions are indeed possible - and that lives can be saved right now, the world over.

Episodes include…
Disease Warriors
Rise of the Superbugs
Delivering the Goods
Deadly Messengers
Back to the Basics
How Safe Are We?

American Masters: Willa Cather: The Road Is All DVD

The Roosevelts: An Intimate History (Hardcover)