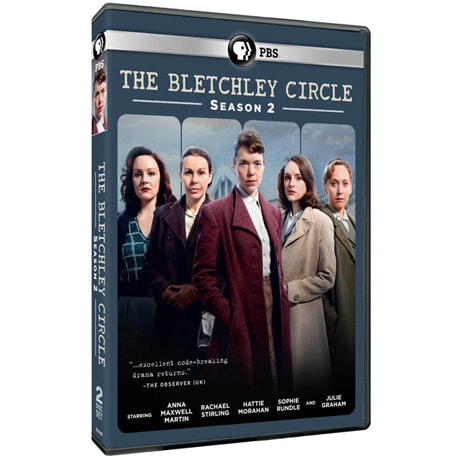 Anna Maxwell Martin, Rachael Stirling, Sophie Rundle, and Julie Graham are joined by Olivier Award-nominated actor Hattie Morahan for two new code-breaking thrillers in The Bletchley Circle, Season 2. The series is based on the lives of four extraordinary and brilliant women who worked at top-secret HQ Bletchley Park during World War II.

Blood on Their Hands: It's 1953, and a year has passed since their first case was solved. Former Bletchley Park colleague Alice Merren (Hattie Morahan) is in prison, awaiting trial for murder, but offers no defense and refuses to speak. Jean (Julie Graham) believes her to be innocent and must reunite the circle to help establish the innocence of one of their own.

Uncustomed Goods: Having lost her job as a translator, Millie (Rachael Stirling) is subsidizing her income by working a sideline business in the black market, which lands her in jeopardy when she becomes caught up in the dangerous and murky world of people trafficking.