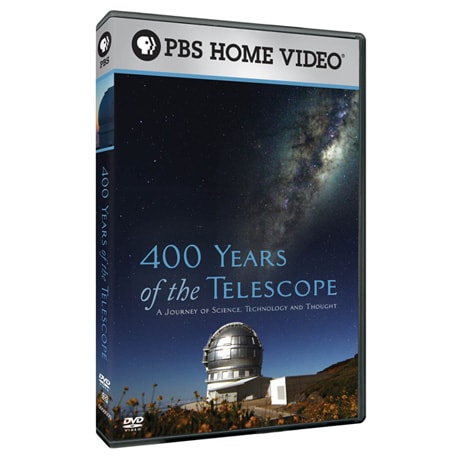 400 Years of the Telescope DVD

$24.99
7 Reviews Write a Review
Item #: WA8882
A documentary following the history of the telescope from the days of Copernicus to recent findings from the Hubble Telescope; 400 Years of the Telescope opens in 17th century Florence, Italy, with Galileo training his spyglass on the heavens and discovering that Jupiter has four moons; Venus has phases like the Moon; and most shocking of all: the Earth is END_OF_DOCUMENT_TOKEN_TO_BE_REPLACED
Add to Wish List

A documentary following the history of the telescope from the days of Copernicus to recent findings from the Hubble Telescope; 400 Years of the Telescope opens in 17th century Florence, Italy, with Galileo training his spyglass on the heavens and discovering that Jupiter has four moons; Venus has phases like the Moon; and most shocking of all: the Earth is not the center of the universe.

4.8 star rating 7 Reviews
7 Reviews
C
Charlie M.
Anonymous User
5.0 star rating
07/17/20
Something deserving widest dissemination
Review by Charlie M. on 07/17/20 review stating Something deserving widest dissemination
I found this work to be highly appealing for its script, high-quality production, and lyrical way of presenting many science breakthroughs brought by historical improvements to telescopic views of the heavens. Neither the script nor the production over sells as some popularizations of science do. Neither does it stoop to video or audio gimmickery that only distracts. Such fluff becomes tiresome and can trample on the science, as if the producer wasnt convinced that the science was sufficiently impressive without amping up the production. This criticism applies to some PBS science programming, but not this one. 400 Years... comes across as an artful film and reveals a well-executed concept reflected in its choice of highlights, interviews, and of course, the images. The film makes clear that we are in an era of great strides in astronomy. The background score uses film-like orchestral effects that aid in a lyrical style of presentation. A minor, but memorable shot is a slow zoom into a Hubble image of whirlpool galaxy. It builds in amazement because the long zoom never reaches a visual point of resolution limits -- like one might expect when zooming into a home digital snapshot on a personal computer. A viewer cant help but be impressed by the technology -- and societal will -- that can deliver such images. I wish all efforts to popularize science were done with such respect for the material. Science is best appreciated with all of its complexities and efforts to oversimplify end up failing and perhaps even setting science literacy back. Not that the material isnt entirely accessible, but it does hints at complexities. I also wish all Americans would view 400 Years... as it provides uplift and confirmation of the better efforts of humans. Watch it with a friend, or better still, a friend knowledgable about astronomy, for follow-up QA.
400 Years of the Telescope DVD
S
Skid
Anonymous User
4.0 star rating
07/17/20
Instructional
Review by Skid on 07/17/20 review stating Instructional
Ive always had a mild fascination with astronomy, and when I found out that this was done through our local PBS station, it was a no brainer to get it. It shed background on the telescope that I didnt know, and spoke about what the future holds in new technology. Even if you have just a mild interest in our solar system, and outer space, youll enjoy it.
400 Years of the Telescope DVD
K
Kevin
Anonymous User
5.0 star rating
07/17/20
awesome
Review by Kevin on 07/17/20 review stating awesome
I just had a new 100 inch HD projection system put in my home. This is the way to travel to other worlds in our lifetime. More More HD Blue ray big sound. Do yourself a favor sit close and get out the headphones.
400 Years of the Telescope DVD
M
Matt
Anonymous User
5.0 star rating
07/17/20
Great runthrough of the telescope!
Review by Matt on 07/17/20 review stating Great runthrough of the telescope!
This movie takes a good look at the development of the telescope. As a teacher, I believe the infomation is presented in a well-organized and thought-out manner. It would be appropriate for early middle school on up. A great movie!
400 Years of the Telescope DVD
M
Miss C.
Anonymous User
5.0 star rating
07/17/20
400 yrs of the Telescope
Review by Miss C. on 07/17/20 review stating 400 yrs of the Telescope
Magnificent.
400 Years of the Telescope DVD
C
Chickadee
Anonymous User
5.0 star rating
07/17/20
Great documentary, very engaging!
Review by Chickadee on 07/17/20 review stating Great documentary, very engaging!
I saw this documentary on PBS TV a little while back and was immediately hooked on its content. I knew about various topics discussed from school, but this film put it all together from the start of exploring space to todays space science. This film really gets one interested in space, both history, technology, and lifes unanswered questions. A must see for inquisitive people of all ages.
400 Years of the Telescope DVD
D
Dr. R.
Anonymous User
5.0 star rating
07/17/20
Perfect it does not get any better.
Review by Dr. R. on 07/17/20 review stating Perfect it does not get any better.
This was an excellent program - and I sp[eak as a retired professional astronomer !
400 Years of the Telescope DVD
Copyright © 2022 Public Broadcasting Service (PBS). All rights reserved.   PBS.org   PBS Mission   Privacy & Security   1-800-531-4727 1-833-565-0293