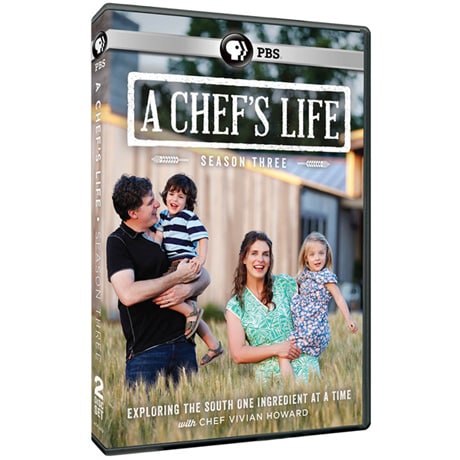 $29.99
4 Reviews Write a Review
Item #: WA8962
In the third season of this Emmy Award-winning series, watch as chef Vivian Howard, with husband Ben Knight and her twin children by her side, blend and balance the high stakes of managing two restaurants, writing a new cookbook and tackling a family reunion feast, all while the farm-to-table chef's plate is packed with food festivals and competitions. Includes all END_OF_DOCUMENT_TOKEN_TO_BE_REPLACED
Add to Wish List

In the third season of this Emmy Award-winning series, watch as chef Vivian Howard, with husband Ben Knight and her twin children by her side, blend and balance the high stakes of managing two restaurants, writing a new cookbook and tackling a family reunion feast, all while the farm-to-table chef's plate is packed with food festivals and competitions. Includes all 13 episodes

In Season Three of A Chef's Life, Vivian's back with a whole new larder of Southern ingredients including peaches, figs, honey, and rutabaga.Whether clamming at the Charleston Food and Wine Festival, exploring the West African roots of okra with her mentor Chef Scott Barton, or judging Southern sides with Ms. Scarlett and Ms. Lillie at the largest BBQ festival in North Carolina, Vivian brings copious amounts of her quintessential charm and honesty. Her rising profile takes her into the kitchen of The Today Show and brings the Avett Brothers to the restaurant, but nothing compares to her newest culinary challenge: finding time to write her first cookbook, all the while raising twins and running two restaurants. It's a chef's life, y'all.

DiscOne
Stop, Squash and Roll
Pretty in Peach
Getting Figgy With It
Pickle Perfect
Prickly Business
If You Can't Beet 'Em…
A Casserole Says Plenty

4.2 star rating 4 Reviews
4 Reviews
B
Bryan
Anonymous User
2.0 star rating
07/17/20
More Reality Show Than Educational Experience
Review by Bryan on 07/17/20 review stating More Reality Show Than Educational Experience
This show has a lot of potential but the more I watch it the more I feel it is a reality show disguised as a show designed to educate the audience. I love Create TV because I can learn a lot without the drama, this show seems to be the one exception.
A Chef's Life, Season 3 DVD
V
Vera's P.
Anonymous User
5.0 star rating
07/17/20
The Real South
Review by Vera's P. on 07/17/20 review stating The Real South
I enjoyed watching this show because of the African Americans on it. They made the show seem more real. I also like that it showed their culture as well and how they learned from each other.
A Chef's Life, Season 3 DVD
L
Littleoldcatlady
Anonymous User
5.0 star rating
07/17/20
Love this series
Review by Littleoldcatlady on 07/17/20 review stating Love this series
Each season of this unique series just gets better. This third season continues with the format of specific ingredient episodes. This season is interesting and entertaining as we watch Vivian work on a cookbook and she and her husband run two restaurants. Look forward to Vivian Howards cookbook.
A Chef's Life, Season 3 DVD
H
Hellothisisbee
Anonymous User
5.0 star rating
07/17/20
Such a great show - we HAD to go there!!
Review by Hellothisisbee on 07/17/20 review stating Such a great show - we HAD to go there!!
Weve really enjoyed watching A Chefs Life, and seeing the ins and outs of Vivian Howard and her family as well as her restaurants during their 3 seasons on PBS. So much so, that this November, we actually planned a vacation in North Carolina to include a 2 night stay in Kinston, JUST so we could eat at Chef and the Farmer. IT WAS AWESOME! Although we didnt see Vivian, she did personally sign a menu for us. We did however see Ben. We were there the day before his art show opened - it was great to see his artwork in the restaurant. The food was only surpassed by the waitstaff and their service. It truly was a great experience, and we plan on returning. We didnt have time to eat at The Boiler Room, so thats on our Bucket List!
A Chef's Life, Season 3 DVD
Copyright © 2023 Public Broadcasting Service (PBS). All rights reserved.   PBS.org   PBS Mission   Privacy & Security   1-800-531-4727 1-833-565-0293