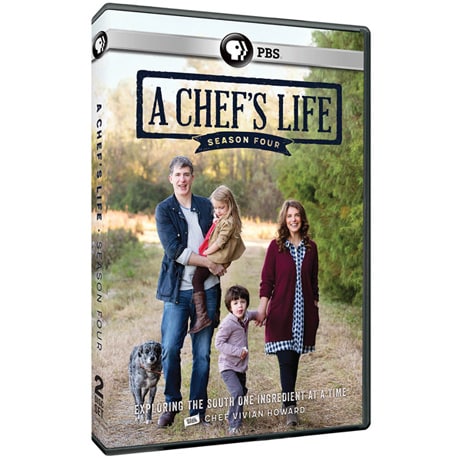 No Reviews Write the First Review
Item #: WA8972
A Chef's Life: Season 4 Hold on to your root vegetables because Season 4 of A CHEF'S LIFE is the most unpredictable yet! Vivian wrangles up sweet spring onions with special help from The Avett Brothers,   END_OF_DOCUMENT_TOKEN_TO_BE_REPLACED
Add to Wish List

Stony the Road: Reconstruction, White Supremacy, and the Rise of Jim Crow (Hardcover)

POV: The Gospel of Eureka DVD

Hold on to your root vegetables because Season 4 of A CHEF'S LIFE is the most unpredictable yet! Vivian wrangles up sweet spring onions with special help from The Avett Brothers, and then turns a roster of watermelon, sunchokes, field peas, and more into new-fashioned fare. Even rabbit, which Vivian calls 'the meat of the future' makes the menu. On a trip to Portland where she crowns cabbage king, Vivian decides to let her hair down. But back at home, the writing and release of her first cookbook is its own whirlwind adventure, especially as major staff changes at the restaurant mean heightened emotions and a heavier workload. Cue your appetite! The fourth helping of A CHEF'S LIFE features a healthy dose of homegrown laughter and inspired ingredients served up by Vivian alongside a hearty cast of farmers, chefs, home cooks, and friends.

Onions and Avetts // My Watermelon Baby
Peas, Please // Stand by Your Cabbage
Cabbage's Last Stand // Rabbit
More Than One Way to Skin a Catfish
All Sunchoked Up // Heavenly Hocks
Mayo, The Mother Sauce

A New Way to Bake (Paperback)

Wages Of Spin II: Bring Down That Wall DVD

FRONTLINE: Much Ado About Something DVD

The Brain with David Eagleman DVD