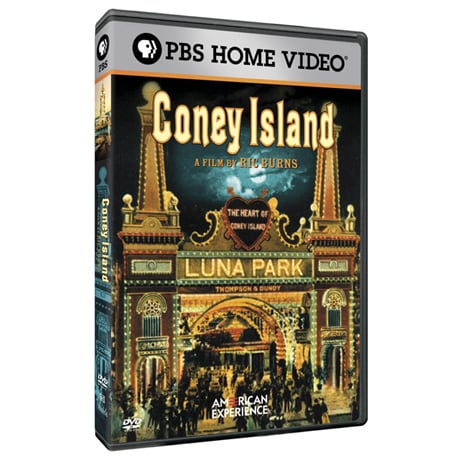 $19.99
7 Reviews Write a Review
Item #: WA9442
Before there was Disneyland, there was Coney Island.  By the turn of the century, this tiny piece of New York real estate was internationally famous.  On summer Sundays, three great pleasure domes--Steeplechase, Luna Park and Dreamland--competed for the patronage of a half-million people.  By day it was the world's most amazing amusement park, by night, an electric "Eden".
Add to Wish List

Before there was Disneyland, there was Coney Island.  By the turn of the century, this tiny piece of New York real estate was internationally famous.  On summer Sundays, three great pleasure domes--Steeplechase, Luna Park and Dreamland--competed for the patronage of a half-million people.  By day it was the world's most amazing amusement park, by night, an electric "Eden".

Uncut version, includes material not seen in the broadcast.

5 star rating 7 Reviews
7 Reviews
S
Sam A.
Anonymous User
5.0 star rating
05/03/22
Mystical Magical Coney Island
Review by Sam A. on 05/03/22 review stating Mystical Magical Coney Island
I recorded this documentary to tape when it first aired in the 90s and Ive been watching regularly ever since. I decided to pick up the DVD before my tape finally wore out. The DVD contains an extra 10 minute segment that is focused around the end of WWII that contains additonal commentary by the inimitable Al Lewis (Car 54, Munsters). This program has been reviewed elsewhere and there is not much more to say other than it is a wonderful, wonderful compendium of what Coney Island was. Great film clips, stills, stories and narration. I would wager that 99% of all New Yorkers, including the residents of Coney Island, are not really aware of what transpired at Coney Island in the last 100+ years. This is an entertaining and enlightening documentary especially for those of us that grew up with Coney Island or were drawn to it later in life. The one thing I would like to see someday soon is a longer documentary on the same subject before we lose any more of those people that have memories or film or still shots of Coney Island to share with us. There must be thousands of hours of film footage of Coney as well as many more untold stories. Its impossible to do justice to the 100+ year history of Coney Island in just 68 minutes. I think that it would not be difficult to generate a ten hour documentary as Ric Burns did with his New York documentary and eventually release it on Blu-ray or DVDs. This sort of stuff would also be very popular during the PBS pledge drive! Are you listening PBS? Mr Burns? Sam
American Experience: Coney Island DVD
M
Malvern
Anonymous User
5.0 star rating
05/03/22
A Mysterious thrill ride
Review by Malvern on 05/03/22 review stating A Mysterious thrill ride
Step right up ! We have clowns, we have calliopes. We have freak shows. Thats it. yes you, you there 3 shots for a nickel, zip zip bing, bang bang , the ROAR of t he wooden roller coaster. The smell of grease and fried foods-fast moving heavy metal wheels on shiny steel tracks bolted to wooden beams to the side and above your head. Win a top shelf prize for your sweetheart. You can do it, its easy as pie. The Coney Island video is an absolute MASTERPIECE of film work. This beautiful work of art goes far beyond the nuts and bolts and lights of Luna Park, where, as Henry Miller once said The Monarch of the mind is a monkey wrench it penetrates our subconscious at a very very very deep and sacred, primal level. This work surpasses Sigmund Freud in dissecting the duality of human consciousness. The Yin Yang of Puritan ethic vs sensuality popped up at Coney island at the beginning of the 20th century for all to see to breath to feel. Unfathomably, supernaturally beautiful light shows. This video is the collective soul of what it is to be an American. It is not a video, if you are an American it is a huge chunk of your soul.
American Experience: Coney Island DVD
A
Always H.
Anonymous User
5.0 star rating
05/03/22
A Superb Production!
Review by Always H. on 05/03/22 review stating A Superb Production!
This is my all-time favorite episode of my favorite PBS series; its filled with fascinating stories, film and photographs. Everyone has heard of Coney Island; even those whove never visited it have ideas and images associated with the name. I grew up in Brooklyn, and spent a lot of time in the later, shabbier Coney Island. Here is the story of how a quiet stretch of beach - home only to gulls, clams and rabbits (coneys) - was transformed into a place like no other on Earth. Coney Island was where New Yorks teeming millions (plus millions of tourists) cast off their cares and inhibitions to frolic in the surf, ride on swift and dangerous contraptions, gape at fantastical architecture and be entertained by grandiose spectacle. If youre looking for a quintessentially American story, this is it.
American Experience: Coney Island DVD
L
Limolee
Anonymous User
5.0 star rating
02/18/22
TOLD ME EVERYTHING I WANTED TO KNOW
Review by Limolee on 02/18/22 review stating TOLD ME EVERYTHING I WANTED TO KNOW
WELL DONE. EDUCATIONAL AND VERY INTERESTING.
American Experience: Coney Island DVD
L
Lorelei
Anonymous User
5.0 star rating
02/18/22
Super Documentary on Coney Island!
Review by Lorelei on 02/18/22 review stating Super Documentary on Coney Island!
This is my favorite American Experience video. I feel like Ive gone back to another time when life was simpler. Its amazing the way some men were able to entertain people before TV and Disneyland!
American Experience: Coney Island DVD
M
Mickael
Verified Buyer
5.0 star rating
02/18/22
good history
Review by Mickael on 02/18/22 review stating good history
good history
American Experience: Coney Island DVD
S
Sue N.
Anonymous User
5.0 star rating
02/18/22
Wonderful, I will watch over and over
Review by Sue N. on 02/18/22 review stating Wonderful, I will watch over and over
Even as a history loving child, I was always intrigued with Coney Island, though I never knew much about it. This film has so much original footage, it makes you feel as though you are with the people that Coney Island changed. What an exciting, and daring experience it must have been for the people of the day! I now feel that I know much more about Coney Island, and the affect it had on American Life, than almost everyone I know.
American Experience: Coney Island DVD
Copyright © 2023 Public Broadcasting Service (PBS). All rights reserved.   PBS.org   PBS Mission   Privacy & Security   1-800-531-4727 1-833-565-0293