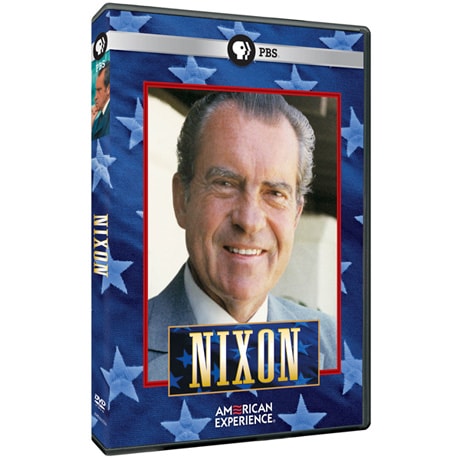 $24.99
4 Reviews Write a Review
Item #: WA9742
Richard M. Nixon was one of American history's most powerful figures. Recalling events etched in U.S. memory, this three-hour program explores a fateful mix of strength and weakness that made him president, then brought him down. Events revealing Nixon's distinctive signature in American politics, from a meteoric rise to Congress to the presidency and the morass of Watergate, unfold in END_OF_DOCUMENT_TOKEN_TO_BE_REPLACED
Add to Wish List

Richard M. Nixon was one of American history's most powerful figures. Recalling events etched in U.S. memory, this three-hour program explores a fateful mix of strength and weakness that made him president, then brought him down. Events revealing Nixon's distinctive signature in American politics, from a meteoric rise to Congress to the presidency and the morass of Watergate, unfold in three parts: The Quest, Triumph, and The Fall.

4 star rating 4 Reviews
4 Reviews
J
John
Verified Buyer
5.0 star rating
06/14/21
Nixon DVD
Review by John on 06/14/21 review stating Nixon DVD
As one who found President Nixon fascinating, I wanted to have this DVD in my American history library for many usages.
American Experience: Nixon DVD
E
Ex82c20
Anonymous User
5.0 star rating
07/17/20
Nixon DVD
Review by Ex82c20 on 07/17/20 review stating Nixon DVD
Fascinating revelation of a tumultuous period in Americas short history. Richard Nixons legacy is unique and will likely never be repeated in the U.S.
American Experience: Nixon DVD
J
Jj
Anonymous User
1.0 star rating
07/17/20
I dont think they know Dick Nixon
Review by Jj on 07/17/20 review stating I dont think they know Dick Nixon
I was disturbed by the racist innuendos against Nixon. They also left out how he opened up China. He did have the right idea about bombing North Vietnam to the surrender table.
American Experience: Nixon DVD
R
Redeagle
Anonymous User
5.0 star rating
07/17/20
A TRUE Greek Tragedy
Review by Redeagle on 07/17/20 review stating A TRUE Greek Tragedy
President Nixon lived on for a full twenty PRODUCTIVE years after his resignation (where this documentary ends), and managed to make yet another of his comebacks in the process, ending his life as a respected Elder Statesman. In a sense, it is somehow fitting that this early edition of the American Experience (1990) ended with Nixon boarding the helicopter and defiantly thrusting his arms into the air on the steps of Marine One, and the chopper circling around the Washington Monument toward a very uncertain future, as this ending reinforces the abrupt end of his height of power and the arc of his Tragedy. The lesson here is that only Nixon HIMSELF could truly destroy Richard Nixon, and he admitted as much (documented on this documentary in his final East Room Farewell: Others may hate you, but those who hate you dont win unless you hate them BACK...and then...you destroy YOURSELF.) And as Nixon spoke those words, he pointed right to his own heart. It is all here for Americans to see: that Nixon finally, and PUBLICLY, achieved SELF-RECOGNITION for what had happened. Granted, hed had help along the way, or, as he said 3 years later in the Frost-Nixon Interviews: I gave them a SWORD, and they stuck it in...and they twisted it with RELISH. And, I suppose that if Id been in their place, Id have done the SAME THING. This is a BALANCED documentary, true to the spirit of the PBS American Experience documentaries: recognition of Nixons shimmering BRILLIANCE as President, Head of State, Commander-in-Chief, Chief Executive, and most of all, as Leader of the Free World and as WORLD Diplomat and MASTER of the chessboard with a foresight second to none. And yet, beset by inner demons that caused him...not to destroy his masterful achievements...but...to destroy his opportunity to continue on as the working Architect during the time he had left to consolidate and build on his achievements on the world stage: THAT is the tragedy for the United States and the World as much as it was a tragedy for him personally. This one is best viewed in succession after The American Experience: LBJ, as in many respects, it was the Vietnam War that brought down the 36th 37th Presidents, so different in certain respects, but so similar in other respects. As for Richard Nixon, a man noted through his entire career as Congressman, Senator, Vice President, successful Wall Street attorney who argued a case before the Supreme Court of the U.S. before his election to POTUS in 68...a man noted for being able to speak at length without a note before him (these speeches without notes both before and AFTER the Presidency were noted by successive generations another Nixonian Tour de Force, and you look around at the current generation of politicians on the Left Right, both officeholders and wannabes, and there really isnt anybody on the scene of the caliber. Literally a character out of SHAKESPEARE, I propose, and well-represented as such as the most complex of our Presidents in this PBS documentary. One good reason RN continues to be the subject of operas, Broadway Plays, movies with the top Hollywood and British talent available--and--not only does the well of nonfiction biography continue to generate new efforts to understand this man by historians, but he continues to fascinate authors who dabble in historical fiction.
American Experience: Nixon DVD
Copyright © 2022 Public Broadcasting Service (PBS). All rights reserved.   PBS.org   PBS Mission   Privacy & Security   1-800-531-4727 1-833-565-0293