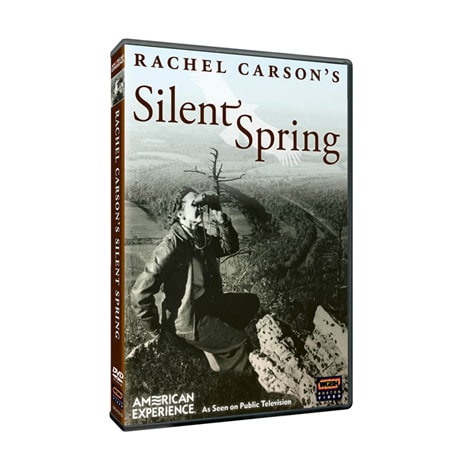 $19.95
5 Reviews Write a Review
Item #: WA9802
She was a biologist for the federal government when she first noted the effects of the unregulated use of pesticides and herbicides, especially DDT. Magazines, afraid of losing advertising, refused to publish her articles. When Rachel Carson published Silent Spring in 1963, she was viciously attacked, called "an ignorant and hysterical woman." But her warning sparked a revolution in environmental END_OF_DOCUMENT_TOKEN_TO_BE_REPLACED
Add to Wish List

She was a biologist for the federal government when she first noted the effects of the unregulated use of pesticides and herbicides, especially DDT. Magazines, afraid of losing advertising, refused to publish her articles. When Rachel Carson published Silent Spring in 1963, she was viciously attacked, called "an ignorant and hysterical woman." But her warning sparked a revolution in environmental policy and a new ecological consciousness.

4.8 star rating 5 Reviews
5 Reviews
J
Justice P.
Anonymous User
4.0 star rating
03/22/21
A Sometimes Forgotten Heroine
Review by Justice P. on 03/22/21 review stating A Sometimes Forgotten Heroine
It is no exaggeration to say that Rachel Carson, through her book Silent Spring, started the modern environmental movement. This well crafted documentary serves as a reminder that one person (and one book) can make a profound difference. The documentary weaves together the person and her work -- work we now see as groundbreaking but work that at the time led experts to launch vicious personal attacks on Rachel Carson. Modern environmentalists would do well to learn from this film: hold fast to your ideals but hold on even more strongly to the scientific evidence. In the end, evidence will trump ideology.
American Experience: Rachel Carson's Silent Spring DVD
F
Frannie
Anonymous User
5.0 star rating
03/22/21
Superb Program!
Review by Frannie on 03/22/21 review stating Superb Program!
Although I have not viewed the CD yet, I ordered it because I had seen it on KQED recently, and I thought it was one of the best of the American Experience programs I have ever seen. I purchased it to see again as well as share it with my children and grandchildren.
American Experience: Rachel Carson's Silent Spring DVD
T
The L.
Anonymous User
5.0 star rating
03/22/21
Thank you PBS
Review by The L. on 03/22/21 review stating Thank you PBS
First viewing for me. Thank you for showing it at a time when government is moving toward abolishing many of the protections we have in place to protect the environment. I fear we are going to go backward with our environmental polcies given the influence conservatives seem to have in our government.
American Experience: Rachel Carson's Silent Spring DVD
B
Bioprofe
Anonymous User
5.0 star rating
07/17/20
Life in America before the EPA
Review by Bioprofe on 07/17/20 review stating Life in America before the EPA
Having grown up in an agricultural area, I vividly remember the mosquito fogging trucks regularly driving down our street. My father was an agricultural researcher and died before he was 60. Ive always believed it was due to pesticide-induced cancer and this program helped solidify that belief. It chronicles life in America after WWII and the price Rachel Carson paid-physically and emotionally-to inform the public of the human and environmental damage that would result from the indiscriminate use of chemical pesticides.
American Experience: Rachel Carson's Silent Spring DVD
C
Cares N.
Anonymous User
5.0 star rating
07/17/20
The Environmental Movement Begins!
Review by Cares N. on 07/17/20 review stating The Environmental Movement Begins!
This video serves as an excellent reminder about when and how the environmental movement actually began. Today, when we are concerned about energy and green seems like a new word, it reminds us that over 40 years ago, Rachel Carson saw the impact humans were having on our environment. Not only does this video show the consequences of our ignorant assault on nature and those who attempted to silence Rachel, but also the human being behind the campaign to stop the irresponsible use of pesticides. A must see for anyone concerned about our environment!
American Experience: Rachel Carson's Silent Spring DVD
Copyright © 2023 Public Broadcasting Service (PBS). All rights reserved.   PBS.org   PBS Mission   Privacy & Security   1-800-531-4727 1-833-565-0293