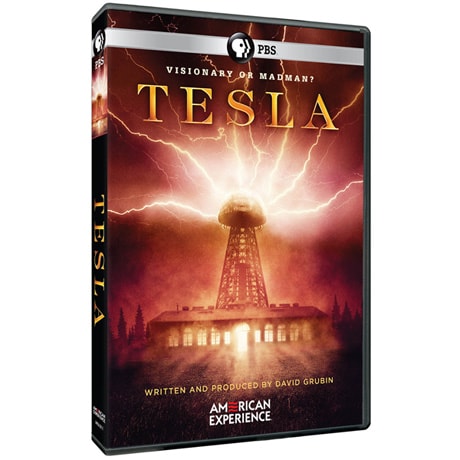 No Reviews Write the First Review
Item #: WA9982AV
Meet Nikola Tesla, the genius engineer and tireless inventor whose technology revolutionized the electrical age of the 20th century. Although eclipsed in fame by Edison and Marconi, it was Tesla's vision that paved the way for today's wireless world.
Add to Wish List

Meet Nikola Tesla, the genius engineer and tireless inventor whose technology revolutionized the electrical age of the 20th century. Although eclipsed in fame by Edison and Marconi, it was Tesla's vision that paved the way for today's wireless world.

American Experience: Tesla Nikola Tesla has come to be seen by many as a tragic figure, a visionary engineer who died impoverished and largely forgotten - eclipsed by names such as Edison and Marconi. A tireless inventor who registered numerous patents and developed many working prototypes, Tesla would become most famous for his dazzling demonstrations. Audiences flocked to see him send thousands of volts of electricity pulsing through his body, dazzled by the spectacle of the inventor seemingly on fire. Even more read about his claims of receiving signals from outer space and his plans for using the earth's natural charge to distribute free electricity. Tesla the strange wizard and mad scientist overtook Tesla the brilliant engineer - the seer of the wireless world we now live in. Lost in the spectacular rise and fall was the real man, a consummate inventor and dedicated engineer. That his ideas ricocheted from tangible inventions to projections of a future with head-spinning possibilities only partly explained his downfall. Yet it was his technology that helped drive the electrical age in the 20th century, and his vision that imagined the wireless world of the 21st century. In Tesla, AMERICAN EXPERIENCE chronicles the life of a man whose ideas revolutionized his time, and ours.