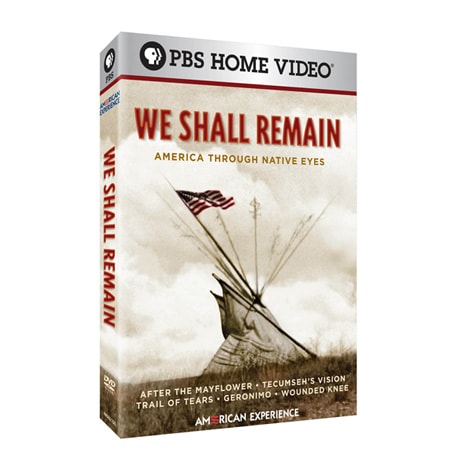 No Reviews Write the First Review
Item #: WB0462AV
A provocative multi-media project that establishes Native history as an essential part of American history. The centerpiece of this initiative is a television series that tells five heartbreaking, yet inspiring stories. Together they highlight Native ingenuity and resilience over the course of 300 years. The series upends two-dimensional stereotypes of American Indians as simply ferocious warriors or peaceable lovers of END_OF_DOCUMENT_TOKEN_TO_BE_REPLACED
Add to Wish List

A provocative multi-media project that establishes Native history as an essential part of American history. The centerpiece of this initiative is a television series that tells five heartbreaking, yet inspiring stories. Together they highlight Native ingenuity and resilience over the course of 300 years. The series upends two-dimensional stereotypes of American Indians as simply ferocious warriors or peaceable lovers of the land.

Episodes include:
1. After the Mayflower - In 1621, Massasoit, sachem of the Wampanoags of New England negotiated a treaty with Pilgrim settlers. A half-century later, as a brutal war flared between the English and a confederation of Indians, this diplomatic gamble seemed to have been a grave miscalculation. Directed by Chris Eyre.
2. Tecumseh's Vision - In the course of his brief and meteoric career, Tecumseh would become one of the greatest Native American leaders of all time, orchestrating the most ambitious pan-Indian resistance movement ever mounted on the North American continent. After his death he would live on as a potent symbol of Native pride and pan Indian identity. Directed by Ric Burns and Chris Eyre.
3. Trail of Tears - Though the Cherokee embraced ""civilization"" and won recognition of tribal sovereignty in the U.S. Supreme Court, their resistance to removal from their homeland failed. Thousands were forced on a perilous march to Oklahoma. Directed by Chris Eyre.
4. Geronimo - As the leader of the last Native American fighting force to capitulate to the U.S. government, Geronimo was seen by some as the perpetrator of unspeakable savage cruelties, while to others he was the embodiment of proud resistance. Directed by Dustinn Craig and Sarah Colt.
5. Wounded Knee - In 1973, American Indian Movement activists and residents of the Pine Ridge Reservation occupied the town of Wounded Knee, demanding redress for grievances. As a result of the siege, Indians across the country forged a new path into the future. Directed by Stanley Nelson.


Bonus features include:
The We Shall Remain 30-minute preview film, which combines a sneak preview of the documentary films, with a behind-the-scenes look at the production of the series.

Scenes from the Native Now project, including films on language, sovereignty , and enterprise.

Behind the scenes footage, including Apache Dance, Wardrobe and Makeup, Cherokee language, and Nipmuc Language.

Printable materials for educators and librarians, including resources for social studies educators to integrate Native American history into curricula; bibliographies for each of the five programs; and related Web sites and resources for further learning.

An Event Kit for Libraries.

"In terms of exposition, inspiration, and cross-cultural outreach, you can think of We Shall Remain as the Native America Eyes on the Prize. Like that landmark documentary, this series reminds us that true glory lies in the honest histories of people, not the manipulated histories of governments. This is the stuff they kept from us." -- The Phoenix

"We Shall Remain demystifies a history all but demolished by myth, propaganda, and Hollywood." -- The Phoenix

"...a chronicle of powerful and shocking events." -- The Washington Post

"The PBS series We Shall Remain about the Native Americans is an interesting and thought-provoking series that all Americans should see." -- South Florida Sun-Sentinel

"We Shall Remain is not the typical Hollywood retelling." -- Deseret News

"The biggest success of the project...is that it brings to life native heroes of American history, whose stories have been only half-told, if at all, in classrooms and popular media." -- Salt Lake City Tribune

"We Shall Remain [is] an ambitious, largely gratifying series..." -- Los Angeles Times