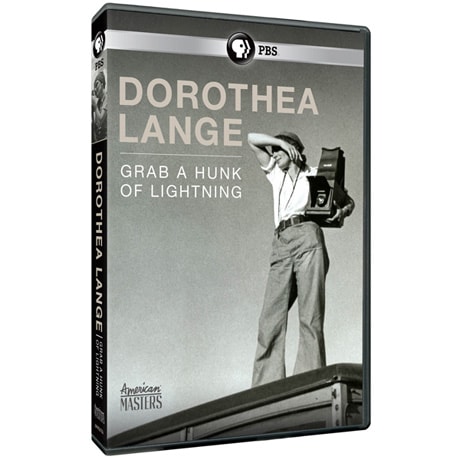 $24.99
4 Reviews Write a Review
Item #: WB0602
Known for her powerful images from the Great Depression, including the haunting "Migrant Mother," Dorothea Lange bore witness as young America matured into a world power. For more than five decades of the 20th century, her lens brought subjects alive, transmitting raw emotions and capturing the human condition. This film is made by Dyanna Taylor, Lange's granddaughter, who began her END_OF_DOCUMENT_TOKEN_TO_BE_REPLACED
Add to Wish List

Known for her powerful images from the Great Depression, including the haunting "Migrant Mother," Dorothea Lange bore witness as young America matured into a world power. For more than five decades of the 20th century, her lens brought subjects alive, transmitting raw emotions and capturing the human condition. This film is made by Dyanna Taylor, Lange's granddaughter, who began her artistic vision, literally, at Lange's feet.

I will go down there, I will photograph this thing,
I will come back, and develop it.
I will print it and I will mount it.
And put it on the wall - all in twenty four hours.
I will do this to see if I can grab a hunk of lightning.
- Dorothea Lang

More than four decades of 20th-century America are filtered through Lange's life and lens - her creations and achievements, her tragedies and losses. Known for her powerful images from the Great Depression, her haunting Migrant Mother remains emblematic of that period. In 1936, when photographs of the poverty-stricken mother of seven, stranded in a camp in California, were published, a national awareness began. As America matured into a world power, Lange continued to bear witness - mass migration, increasing urbanization and the cost of war at home - bringing I will set myself a big problem.

5 star rating 4 Reviews
4 Reviews
B
Brad
Anonymous User
5.0 star rating
07/17/20
Art for Lifes Sake
Review by Brad on 07/17/20 review stating Art for Lifes Sake
Thats the text of a placard hanging in Langes studio at one time. This film premiered 49 years after Langes death in 1965, made by her granddaughter Dyanna Taylor, winner of five Emmys, and her talent shows. Comprehensive and especially rich in family history context, presenting what Lange actually thought as she was working; enthralling. One example: she looked out the window of her SF studio one day in the 20s and saw the labor unrest, decided this was where life was happening rather than in the isolated tech activity of her darkrooms, out she went. Her major retrospective at MOMA opened 3.5 months after she had died, somehow the processes involved in selecting and arranging her material had all been filmed, private interviews and 1964 work sessions with a MOMA curator/arranger --- we get her opinions even as she was dying. Insight: there were SEVEN images of her most famous pic, Migrant Mother, PBS gives us most or all of them, shots of the whole destitute family. Insight: an attack of polio at age seven left her with a lifetime limp due to misshapen leg and foot, post-polio syndrome returned at the end of her life, but this did not slow her down one bit during her work. The MOMA exhibit was concerned with reflecting which photographs should talk to each other, over a lifetime of thousands of images from which to select. She had said art is an act of total attention, and in the film, one commentator said that she was always interested in capturing a sense of timelessness. Well, PBS has done this in spades, the production is timeless and admirable, superbly scripted. Film itself is that hunk of lightning.
American Masters: Dorothea Lange: Grab A Hunk of Lightning DVD
A
A S.
Anonymous User
5.0 star rating
07/17/20
AMAZING MARVELOUS INCREDIBLE PROVOCATIVE
Review by A S. on 07/17/20 review stating AMAZING MARVELOUS INCREDIBLE PROVOCATIVE
I saw this documentary art piece on the PBS show American Masters a few days ago and was mesmerized from start to finish. A snapshot of part of history that sometimes goes shamefully unnoticed, and a chronicle of an artists life that brings that chapter, and so much more in American History and experience into clear and sensitive focus. THANK YOU PBS.
American Masters: Dorothea Lange: Grab A Hunk of Lightning DVD
V
Vrcat
Anonymous User
5.0 star rating
07/17/20
amazing dvd
Review by Vrcat on 07/17/20 review stating amazing dvd
I learned so much about US history that they never teach us in school - fascinating!
American Masters: Dorothea Lange: Grab A Hunk of Lightning DVD
M
Mindfulness E.
Anonymous User
5.0 star rating
07/17/20
EVERYONE SHOULD SEE THIS
Review by Mindfulness E. on 07/17/20 review stating EVERYONE SHOULD SEE THIS
Watching this video on a PBS special, was a fantastic experience. I learned more about the era when Dorothea Lange was grabbing her hunk of lightning and what insight and impact the photos she made while doing so had for the rest of us. I loved it so much I got a copy for my daughter and her husband and son and will give to them as one of their gifts for the holidays. Im still considering getting the book for me or as a companion gift for my family. THANKS PBS.
American Masters: Dorothea Lange: Grab A Hunk of Lightning DVD
Copyright © 2023 Public Broadcasting Service (PBS). All rights reserved.   PBS.org   PBS Mission   Privacy & Security   1-800-531-4727 1-833-565-0293