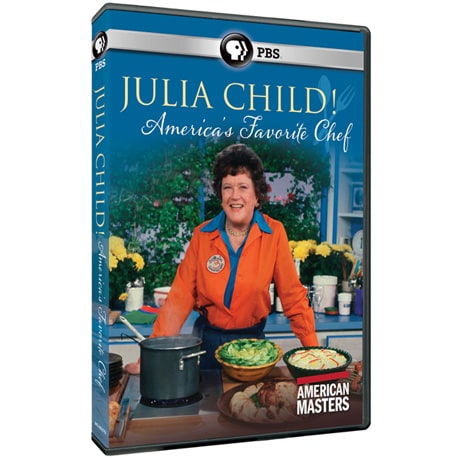 $19.95
5 Reviews Write a Review
Item #: WB0672
American Masters: Julia! America's Favorite Chef Julia Child was not a natural-born cook - when she married, she could barely boil an egg. But she fell in love with French food, and soon enrolled at   END_OF_DOCUMENT_TOKEN_TO_BE_REPLACED
Add to Wish List

The Life and Times of Frida Kahlo DVD

American Masters: Julia! America's Favorite Chef Julia Child was not a natural-born cook - when she married, she could barely boil an egg. But she fell in love with French food, and soon enrolled at the Cordon Bleu where she learned the great tradition of Classical French cuisine. Later, with two French women, she devoted years to writing a manuscript finally published as Mastering the Art of French Cooking, which became a culinary classic and sold over one million copies.

Warm and exuberant, Julia was a natural television star. In 1963, she appeared on public television in The French Chef, a cooking series unlike anything yet seen on TV. Scooping up a spilled potato pancake or coaxing a reluctant soufflé, Julia was not afraid of making mistakes. Soon a nation fed on Shake n' Bake and Tang would be experimenting with quiche Lorraine and boeuf bourgignon and cooking would become a national pastime.

This is the story of Julia's two great loves - love for her husband Paul and for cooking. Through an interview with Julia herself, filmed in her fabled kitchen, and rare images from the photo collection of Paul Child and from family photo albums, Julia Child is revealed as few have seen her before in this tribute and testament to a great American icon.

Henry and Anne: The Lovers Who Changed History DVD