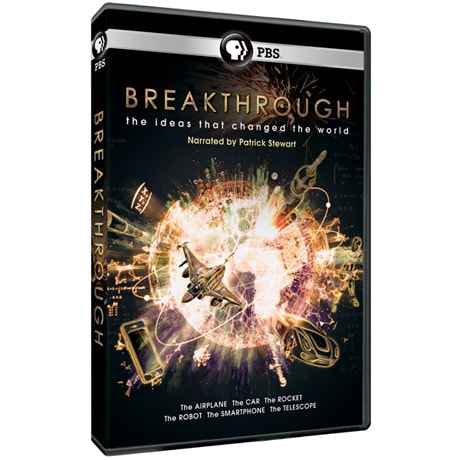 Breakthrough: The Ideas That Changed the World DVD - AV Item

No Reviews Write the First Review
Item #: WB1472AV
Breakthrough: The Ideas That Changed the WorldThis is the amazing story of how humans changed the world forever, told through six iconic objects that we take for granted. These are the secrets of how we got to our modern world, told in an accessible, exciting format with broad appeal. The Car - The Airplane - The Smartphone - The Rocket END_OF_DOCUMENT_TOKEN_TO_BE_REPLACED
Add to Wish List

Breakthrough: The Ideas That Changed the WorldThis is the amazing story of how humans changed the world forever, told through six iconic objects that we take for granted. These are the secrets of how we got to our modern world, told in an accessible, exciting format with broad appeal. The Car - The Airplane - The Smartphone - The Rocket - The Robot - The Telescope.

Each object is the culmination of a long-held human dream - to explore, to communicate, or to find our place in the universe. They are familiar, yet hidden within them are thousands of years of thought, struggle, sacrifice, determination, and insight. Each one is packed with incredible and often little-known stories. There are surprising accidents, colorful characters, and moments of joy or despair stretching back in time, often to the beginning of human civilization itself. The shows are littered with visionaries–people with the passion that drove them to risk death, poverty, or ridicule. Each, whether knowingly or not, advanced our species' progression to where we are now, often at considerable cost to themselves. The result is a mind-blowing science-led journey through human history, full of unintended consequences and incredible connections. It reveals how science, invention, and technology built on one another to change everything - a process that continues to this very day.

"The Robot"
Learn how robots were first conceptualized in ancient Rome and see how their use has evolved over the centuries, from the calculator to the Roomba. Then, take a sneak peek at what future robots will be able to do.

"The Rocket"
Learn the explosive history of the rocket, from its origin in ancient China, to its use as a weapon of war, to how adding hydrogen allowed it to carry astronauts all the way to the moon.

"The Smartphone"
Dial in to the fascinating history of the smartphone, from its roots in Morse Code to 2007, when Apple unveiled the first-ever iPhone. Plus, see how the next generation of smartphones will allow us to communicate through them just by thinking.

"The Telescope"
Meet the brilliant minds throughout history, from Galileo to Edwin Hubble, responsible for creating the telescope. Today, their invention allows humanity to reach the furthest limits of seeing - 13 billion light-years out.

"The Car"
Go for a ride through the 9,000-year history of the car, from its roots in dogsleds to Henry Ford's affordable and assembly line-built Model T, and meet the scientists working on the next generation of self-driving automobiles.

"The Airplane"
Take to the sky with the dreamers whose work gave humans the ability to fly. From Leonardo da Vinci's "flying machines" to the modern commercial plane, without these inventions, we may have never left the ground.