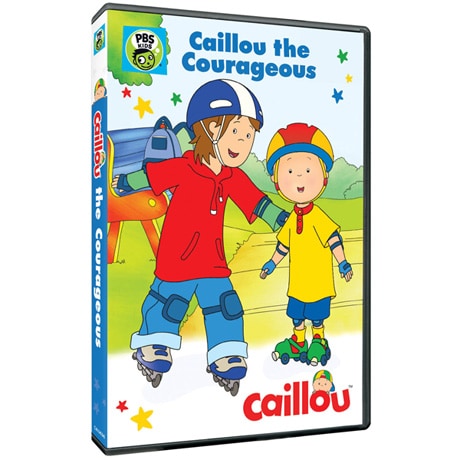 $12.99
1 Review Write a Review
Item #: WB1572
Caillou: Caillou The Courageous Growing up can be fun, but sometimes preschoolers get scared! From overcoming a fear of spiders to trying something new, Caillou empowers preschoolers to take on life's   END_OF_DOCUMENT_TOKEN_TO_BE_REPLACED
Add to Wish List

Caillou: Caillou The Courageous Growing up can be fun, but sometimes preschoolers get scared! From overcoming a fear of spiders to trying something new, Caillou empowers preschoolers to take on life's little challenges and to explore the world around them! Caillou the Courageous features seven stories that will help kids feel like they can accomplish anything!

Caillou Climbs
Mommy takes Caillou and Clementine to an indoor rock climbing wall, but Caillou doesn't want to give it a try. It's much too intimidating! Caillou overcomes his fear by literally taking things one step at a time.

The Spider Issue
After looking at a spider alien comic book with his older pal, Andre, Caillou feels afraid of real spiders. He's nervous around the house, until Daddy tells him some spider facts and shows him how cool spiders can really be … and Caillou has to agree; they ARE pretty cool!

Caillou Roller Skates
Caillou wants to learn how to roller skate … until he realizes roller skating is very difficult. With a little help and guidance from his pre-teen friend, Daniel, Caillou decides to keep practicing, so his skills will improve - just like Daniel's did!

Caillou's Shadow
Caillou likes it when Miss Martin calls him a "shadow scientist" … so much so, he's afraid to admit he doesn't know everything about shadows! When Caillou's curiosity gets the better of him, he learns it's much easier to find the answers you're looking for when you ask questions.

Say Lettuce!
Caillou wants to take a picture of a bunny rabbit in Grandma's garden, but it proves a harder task then he originally thought. With a little perseverance (and a little lettuce from the garden) he finally sees the task through to the end - and gets a photo he's proud of!

You're Not Miss Martin!
Caillou isn't too happy when Miss Martin is away and his preschool class has a substitute teacher - Mrs. Shelley. She does everything differently and isn't familiar with the usual routines. When Caillou tries to see things from Mrs. Shelley's perspective, he decides to give her another chance … only to realize how wonderful Mrs. Shelley really is … even if she isn't Miss Martin.

Cailloodles
Jeffrey and Jason are having fun making up silly names for their classmates. But they don't realize they're hurting others' feelings. Caillou isn't sure what to do - until a chat with Daddy inspires him to speak up and tell Jeffrey and Jason how he feels. When the twins realize their jokes aren't funny to everyone, they decide to stick to calling each other names.