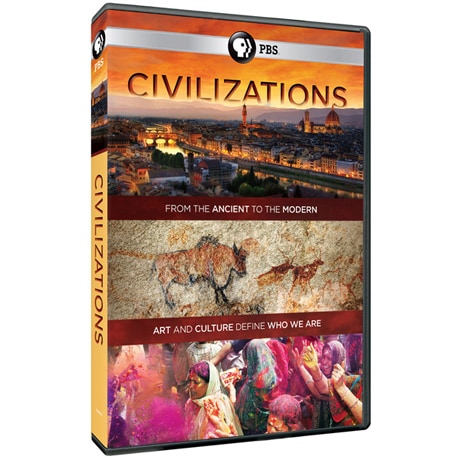 $49.99 $29.99
3 Reviews Write a Review
Item #: WB1852
Survey the history of art, from antiquity to the present, on a global scale. Discover the role art and creative imagination have played in forging humanity, and see works of beauty, ingenuity, and illumination across cultures.
Add to Wish List

Survey the history of art, from antiquity to the present, on a global scale. Discover the role art and creative imagination have played in forging humanity, and see works of beauty, ingenuity, and illumination across cultures.

Civilizations Survey the history of art, from antiquity to the present, on a global scale. This nine-part series reveals the role art and creative imagination have played in forging humanity, and introduces viewers to works of beauty, ingenuity, and illumination across cultures. Principal contributors Simon Schama, Mary Beard, and David Olusoga travel across the globe, visiting such cultural landmarks as the great mosques of Istanbul, the ancient cities of Mesoamerica, the Buddhist caves of Ajanta in India, the Aztecs' Templo Mayor in modern Mexico City, the funeral site of China's first emperor and many more. Narrated by Liev Schreiber.

3.6 star rating 3 Reviews
3 Reviews
I
Irishmike
Anonymous User
1.0 star rating
02/07/21
I cannot stand the way this was filmed
Review by Irishmike on 02/07/21 review stating I cannot stand the way this was filmed
We are getting sick and tired of so much of the program being out of focus or filmed from behind something or the camera shaking. There are scenes were it goes from out of focus to in focus then back to out of focus. This is ridiculous and TOTALLY UNNECESSARY. Someone thinks this is cute but no one we know likes this, enjoys this, nor feels its necessary. Everyone is spending a lot of money on high definition television to get the best picture possible then we get these people that do these foolish gimmicks. I wonder if these people that make us watch these shows out of focus walk around all day with dirty glasses because thats what watching these shows are like.
Civilizations DVD
A
Altair
Anonymous User
5.0 star rating
01/11/21
I enjoyed this so much I am buying a copy.
Review by Altair on 01/11/21 review stating I enjoyed this so much I am buying a copy.
We streamed this and found it enthralling. It raises intriguing questions, provides plenty of interesting information and is visually stimulating.
Civilizations DVD
P
Peri H.
Anonymous User
5.0 star rating
01/11/21
Like a great book, youll want to revisit this masterpiece
Review by Peri H. on 01/11/21 review stating Like a great book, youll want to revisit this masterpiece
It is not a simple step to think of this produced and conceptualized program as a bit of a revolution in the formal discipline of art historybut I will brave that path from my small perch. It presents to us histories (and the plural I use here is quite intentional) specific to a placeand placesand to a timeand times. A grand global lattice comprised of artistic creations and inspirations acro cultures and societies not addreed in, and drawn together, by historisizing but by a truer ( or more truthful) consideration of complex sources and inspirations driving artistic creation. And that is (in the sense of historys etymological origins: as a learned enquiry explored through seeing) depiction rendered in and through the context (locally, of place and self) of visions that are shared between societal, political, economic, and environmental changes and upheavals in motion by people/artists separated by signal distances and sociocultural/political evolutions. This is NOT the art history narrative that has been conventionally taught in academia in decades pastin fact it literally blew my minds educated mental mindsetan established false reference deep in my intellect. This productions genius is, to my mind, in no small measure due to the great minds of its primary writer/presentersthe brilliant and iconoclastic claicist Mary Beard and art historian Maya Jasanoff, historians Simon Shama and David Olusoga.Civilizations is a stand-out archival survey and narrative of our humanity linked deeply and far beyond the rhetoric of paradigms and prejudice that has too-long been the progenitor of art historical academic education.
Civilizations DVD
Copyright © 2022 Public Broadcasting Service (PBS). All rights reserved.   PBS.org   PBS Mission   Privacy & Security   1-800-531-4727 1-833-565-0293