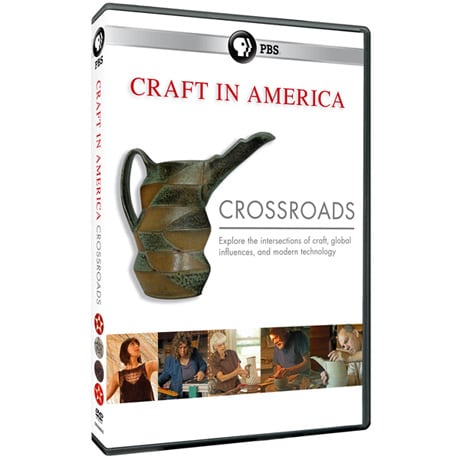 NOVA: The Truth About Fat DVD

Explore the intersections of craft, global influences, and modern technology.

The Peabody Award-winning series Craft in America is dedicated to exploring America's rich craft history. Episode Nine of this series, Crossroads, follows the evolution of American craft through filmed visits to five nationally acclaimed artists. We explore the crossroads of craft, where change evolves from global influences and the exciting intersections between the handmade and modern technology.

- Sculptor, activist, furniture maker, and textile artist, Tanya Aguiñiga designs objects and environments in which people experience the beauty of the handcrafted. Using the raw materials of her bi-cultural experience, she creates a vital, unique personal expression.

- The Hamada-Leach ceramic tradition is centered in a community of potters in the Midwest, whose work is based on traditional wares for everyday use. Known in Japan as ""Mingei"" and imported to America in the 1960s, this aesthetic influenced the emerging counter-culture and as a result, modern design. Meet Warren MacKenzie, Jeff Oestreich, and Clary Illian, central figures in this cross-pollination.

- Lia Cook has for years been at the forefront of an unusual mix of old and new. She recently melded techniques of 18th century Jacquard weaving with an inquiry into brain functioning, thus combining the most basic manual technology with contemporary technological and scientific practice.

The Hidden Art of Islam DVD