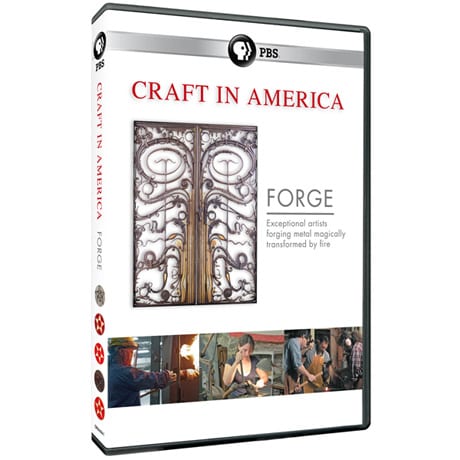 James McNeill Whistler and the Case for Beauty DVD

Welcome To My Studio: Season 6 DVD

The Peabody Award-winning series Craft in America is dedicated to exploring America's rich craft history. Forge profiles exceptional artists forging metal magically transformed by fire. Forging is an ancient method where metal is heated and reheated, strengthened and hammered into sinuous, extravagant curves. Through this mysterious process, artists express their creativity and skill.

- Chloe Darke, age 22, is hungry to explore and driven to create. She produces hand-wrought silver place settings for Old Newbury Crafters in Massachusetts, where her daily work reinforces and informs her personal work, which centers on the female form and aesthetic.

- Tom Pullin served in the U.S. Army for almost 25 years and he brings his team-oriented service background to his art. Elemental and visceral, the practice of metal forging empowered him to make peace with a haunting, emotional past, as the act of ""making"" is itself healing.

- Albert Paley is ranked among the most successful and prolific sculptors in America, and his work has evolved through time and technology to a monumental scale. From the first mental image, to drawings, to cardboard models, to CAD (computer-aided design) maquette, to final multi-story welded steel sculpture, the hand is still his most important tool. Join Paley as he prepares for Paley on Park Avenue, the most ambitious project of his 50-year career.