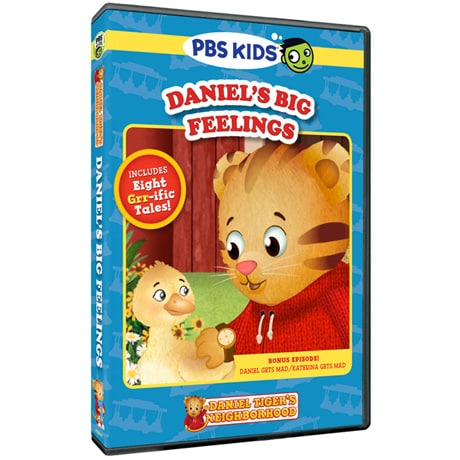 $12.99
1 Review Write a Review
Item #: WB2262
Four-year-old Daniel Tiger invites young viewers directly into his world, giving them a kid's eye view of his life and making them feel like one of his neighbors. Episodes include: Duckling Goes Home; Daniel Feels Left Out; Daniel Gets Frustrated; Frustration at School; Daniel is Jealous; Jealousy at the Treehouse; Someone Else's Feelings; and Empathy at School.
Add to Wish List

Four-year-old Daniel Tiger invites young viewers directly into his world, giving them a kid's eye view of his life and making them feel like one of his neighbors. Episodes include: Duckling Goes Home; Daniel Feels Left Out; Daniel Gets Frustrated; Frustration at School; Daniel is Jealous; Jealousy at the Treehouse; Someone Else's Feelings; and Empathy at School.

Duckling Goes Home - Today at school, the children find out that Ducky has grown too big to be their classroom pet and it's time to take him back to the farm. This news is very upsetting, especially to Daniel and Miss Elaina. The children cope with their sadness in different ways and soon they feel a little bit better.

Daniel Feels Left Out - On their way home from the Neighborhood grocery store, Dad and Daniel stop by the Treehouse to say "hello." O the Owl and Katerina Kittycat have been playing together all day, and are even going to have dinner together. When it is time to go home with Dad, Daniel feels left out and sad. Back at home, Mom and Dad Tiger help Daniel with his sad feelings and he soon feels a bit better.

Daniel Gets Frustrated - Daniel is staying at home with Mom Tiger today. He really wants to play with Prince Wednesday, but he is visiting his cousin Chrissie. He asks Mom if they can go to Music Man Stan's shop, but they can't because it is closed. Daniel gets really frustrated when it seems like he's unable to do anything he wants to do. With some guidance from Mom, Daniel learns how to work through his frustration.

Frustration at School - Daniel and his friends are playing "restaurant" at school and Daniel feels frustrated when he can't find the toy he is looking for. Teacher Harriet helps him realize that the right thing to do is to take a step back and ask for help.

Daniel is Jealous - Daniel and Katerina are playing "airplane" with Grandpere. Daniel thinks Katerina is getting too much attention from Grandpere and starts to feel jealous. Daniel explains his feelings and is reassured that he is Grandpere's one and only Daniel.

Someone Else's Feelings - Daniel and O the Owl are pretending to be handymen, using their toy tools to make "repairs" to Daniel's playhouse. Daniel is having lots of fun hammering loudly, but it's upsetting O, who would rather do something quieter. Daniel loves hammering so much that it's hard for him to see why it upsets O. Mom helps Daniel be empathetic and think about how O is feeling: Daniel remembers a time when he was upset because Miss Elaina was being way too loud for him. He doesn't want O to feel this way, and realize`s that they can both have fun as quiet handymen!

Empathy at School - Chrissie and Daniel are playing together at school today, but when Chrissie loses her special bracelet, she doesn't feel like playing anymore. Daniel has trouble understanding why until Teacher Harriet shows him how to be empathetic and think about how Chrissie may be feeling. Daniel remembers just how worried he was when he thought he had lost Tigey, and decides to stop playing and help find the bracelet.

Daniel Gets Mad
Katerina Gets Mad