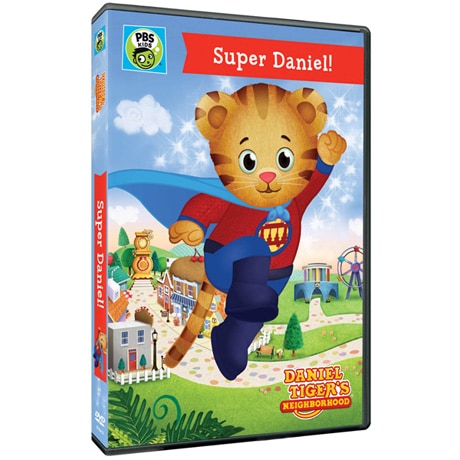 No Reviews Write the First Review
Item #: WB2362
Daniel Tiger's Neighborhood: Super Daniel! ZOOM! Super Daniel is always ready to save the day! There are lots of ways for a young tiger like Daniel to be brave and adventurous, such as using his ""super   END_OF_DOCUMENT_TOKEN_TO_BE_REPLACED
Add to Wish List

John Lewis - Get in the Way DVD

Smithsonian Timelines of Everything

ZOOM! Super Daniel is always ready to save the day! There are lots of ways for a young tiger like Daniel to be brave and adventurous, such as using his ""super powers"" to help out friends and solving problems by coming up with his own solutions. Daniel soon discovers that trying new things and being proud of oneself can make anyone feel like a superhero!

Stories include…
Super Daniel! - Daniel and Grandpere are at home pretending to be superheroes when Daniel notices that Dad has forgotten to take his lunch to work with him. He and Grandpere take Dad's lunchbox to the Clock Factory and Daniel uses his imagination to have several super adventures along the way.

Goodnight Daniel BONUS
Daniel Fixes Trolley - Daniel accidentally breaks one of his toy trolley's wheels while playing. When Mom is too busy to help Daniel put the wheel back on, she urges him to try to figure it out on his own and explains that fixing it on his own will make him feel good about himself.

Daniel Tries a New Food - Miss Elaina is having dinner with the Tiger family and she encourages Daniel to try some new food: Veggie Spaghetti and Banana Swirl. Daniel is convinced he won't like Veggie Spaghettit, even though he's never tried it before. Miss Elaina encourages him to be adventurous and try the new food. She does the same herself, and even though she doesn't like all of it, she's proud of herself for trying.

Daniel Doesn't Want to Stop Playing - Daniel is playing ""Trolley"" with Mom and Dad in the living room. When Mom tells him that it's time to work on his school project, Daniel doesn't want to stop playing. Mom helps Daniel move on by allowing him to pick one more thing to do with his toy Trolley. Daniel makes one last stop and then he's ready to work on his project.

NOVA: School of the Future DVD