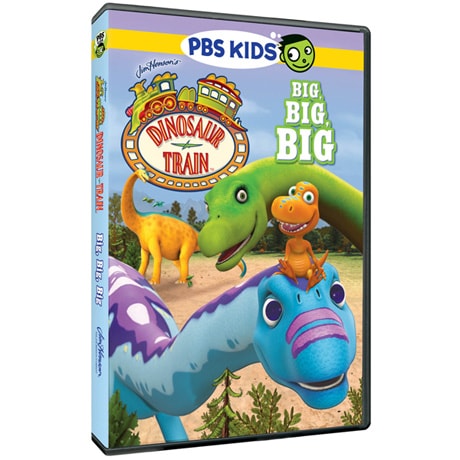 No Reviews Write the First Review
Item #: WB2762
Dinosaur Train embraces and celebrates the fascination that preschoolers have with both dinosaurs and trains while sparking an interest in life science, natural history, and paleontology. Dinosaur Train - Big, Big, Big includes: Remember the Alamosaurus; Heck of a Neck; An Apatosaurus Adventure; Arnie Rides the Flat Car; Ned the Quadruped; One Big Dinosaur; Dinosaur Poop; and All Kinds of END_OF_DOCUMENT_TOKEN_TO_BE_REPLACED
Add to Wish List

Dinosaur Train embraces and celebrates the fascination that preschoolers have with both dinosaurs and trains while sparking an interest in life science, natural history, and paleontology. Dinosaur Train - Big, Big, Big includes: Remember the Alamosaurus; Heck of a Neck; An Apatosaurus Adventure; Arnie Rides the Flat Car; Ned the Quadruped; One Big Dinosaur; Dinosaur Poop; and All Kinds of Families.

Buddy and the Pteranodon kids hop on the Dinosaur Train to meet some of the biggest dinosaurs around! They meet Allie Alamosaurus, an enormous, long-necked, plant-eating sauropod; Denise Diplodocus, whose neck and tail the kids mistake for a snake and a bridge; and Apollo Apatosaurus a huge, long-necked, long-tailed dinosaur looking for adventure. Finally, they visit their old friend Arnie Argentinosaurus, who has gotten too big to ride the Dinosaur Train - until Tiny and Buddy arrange for him to ride on the new flatbed car!

Remember the Alamosaurus - The Pteranodon kids and Dad get the idea to travel around on the Dinosaur Train and meet some of the biggest dinosaurs. They even sing a song, `The Biggest Dinosaurs', before meeting Allie Alamosaurus, an enormous, long-necked, plant eating sauropod who is very friendly. Allie explains that her huge, strong legs hardly bend at all, but she can still have fun playing games with the kids, and teaching them some of her favorites!

Heck of a Neck - The Pteranodon kids have a Nature Trackers adventure when they meet Denise Diplodocus, a super-long, super big dinosaur. At first the kids mistake Denise's neck for a snake, and tail as a bridge. Later, Denise amazes the kids, telling them how hard it is for her to raise up her long, heavy neck. Shiny and the others help her raise her neck higher than normal just once, but it feels better for Denise to keep closer to the ground and low-lying trees.

An Apatosaurus Adventure - The Pteranodon kids visit the Jurassic Time Period to meet Apollo Apatosaurus, a huge, long-necked, long-tailed dinosaur who likes adventure. Apollo loves to whip his long tail, and does so as he leads the kids on a pretend adventure to find a hard-to-reach tree with yummy, delicious leaves!

Arnie Rides the Flat Car - Buddy, Tiny, and Mom visit their very large sauropod friend, Arnie Argentinosaurus, and his dad. Arnie has grown bigger since our kids have seen him and is now too big to ride on the Dinosaur Train anymore. Tiny and Buddy arrange with Mr. Conductor for Arnie to be the first big dinosaur to ride on the newest Dinosaur Train car - the flatbed car!

Ned the Quadruped - Buddy and Tiny tour the Dinosaur Train and earn their Junior Conductor hats while their friend Ned, a four-legged, long-necked Brachiosaurus and regular Train rider, tags along.

One Big Dinosaur - Tiny and Buddy visit a dinosaur family called Argentinosaurus, some of the biggest land creatures ever! The kids find out there are great things about being really big, and that it's also great being their own size.

All Kinds of Families - When Buddy expresses his feelings about being adopted to Tiny and Mrs. Pteranodon, they tell him that he will always be a part of the Pteranodon family. Mom takes Buddy and Tiny to meet another adopted dinosaur kid named Sonny Sauroposeidon, a huge tall creature, now a part of tiny Mikey Microraptor's family. Buddy and Sonny bond over being adopted and knowing that they are both in adoptive families that are different species but still love and appreciate them.