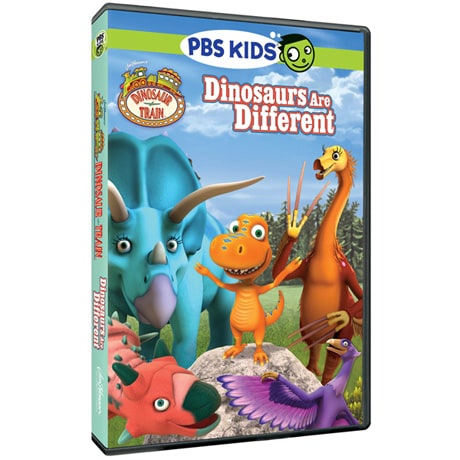 $12.99
1 Review Write a Review
Item #: WB2812
Join Buddy, Tiny, Shiny and Don as they discover cool features and adaptations that make every dinosaur species different. The Pteranodons learn that everyone is unique, even the dinosaurs within their own family. Adventure is never far around the corner when you hop on the Dinosaur Train!
No Longer Available

Join Buddy, Tiny, Shiny and Don as they discover cool features and adaptations that make every dinosaur species different. The Pteranodons learn that everyone is unique, even the dinosaurs within their own family. Adventure is never far around the corner when you hop on the Dinosaur Train!

All aboard the Dinosaur Train as Buddy, Shiny, Tiny and Don meet lots of new dinosaurs and eagerly explore the features unique to each species! Together, they form hypotheses about what makes each dinosaur different. Whether it's their friend Tank's gigantic frill, Valerie Velociraptor's beautiful feathers, or Bucky's sharp teeth, the kids discover, "we're all creatures with different features!" Even among the Pteranodon family, the youngsters uncover unique personality traits, strengths, and skills that make each other special. Your family will love learning about dinosaurs together with Buddy and his siblings in this imaginative setting.

Now With Feathers! - Dad gives Tiny and Buddy a mystery feather and the kids become "detectives," riding the Dinosaur Train to meet Valerie Velociraptor, who shows the kids what life is like covered with beautiful feathers.

Long Claws - Buddy, Tiny, Don and Mrs. Pteranodon head to the thicket to ask a Therizinosaurus family about their colossal claws. They demonstrate how they use their claws for self-defense, while the daughter, Teri, shows the kids her favorite practice spot.

The Old Bird - Buddy, Tiny and Mom ride the Dinosaur Train on a play date with Petey Peteinosaurus, and meet Arlene Archaeopteryx, a bird from the family of the oldest birds ever! The kids learn that Arlene is both a bird and a dinosaur.

Buck-Tooth Bucky - When Don finds a mystery tooth in Dad's old tooth collection, Dad decides to take the kids on an investigation. They discover that the tooth belongs to a dinosaur called Masiakasaurus, a creature with a mouthful of protruding buck teeth!

New Neighbors - Mr. Pteranodon is annoyed when some hadrosaurs move in next door! The new neighbors are a family of Lambeosaurus, who have crests that hoot - and too loudly, as far as Dad is concerned. After a rocky start, the Pteranodon and Lambeosaurus families agree on terms they can both live with and become fast friends.

An Armored Tail Tale - The Pteranodons tag along as Hank Ankylosaurus visits the Big Pond to scout a Dinoball talent named Eugene Euoplocephalus. Eugene is a smaller version of Hank, an armored dinosaur with a giant tail-club. Hank and Eugene really hit it off, and after they all play Dinoball, Hank recruits Eugene to play on his team!

The Wing Kings - The Pteranodon family stretches their wings at Quetzalcoatlus Canyon, where Mr. Pteranodon flew when he was younger and nicknamed the "Wing King." The family meets Quincy Quetzalcoatlus and his Dad, a huge flying Pterosaur. Together, the two "Wing Kings" wow their kids with some sensational aerial acrobatics.

Hornucopia - At the Big Pond, Tank introduces the Pteranodon family to his friend, Stacie Styracosaurus, a fellow Ceratopsian with a crown of elaborate horns on her head. Everyone attends Stacie's "Hornucopia" celebration, where she reveals her new big horns and then performs a moonlit shadow show with her Styracosaurus family.