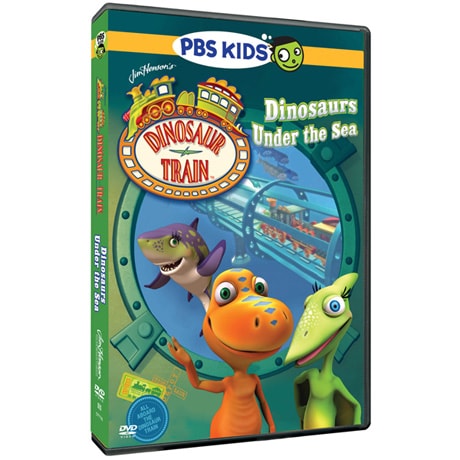 $9.99
18 Reviews Write a Review
Item #: WB2852
Dinosaur Train embraces and celebrates the fascination that preschoolers have with both dinosaurs and trains while sparking an interest in life science, natural history, and paleontology. Dinosaur Train: Dinosaurs Under the Sea episodes include: Elmer Elasmosaurus - The Pteranodon family travels on the Dinosaur Train with the Aquacar to an underwater train station to transport Elmer Elasmosaurus back to his END_OF_DOCUMENT_TOKEN_TO_BE_REPLACED
Add to Wish List

PBS KIDS: Be My Valentine DVD

Super WHY!: Sleeping Beauty and Other Fairytale Adventures DVD

Dinosaur Train embraces and celebrates the fascination that preschoolers have with both dinosaurs and trains while sparking an interest in life science, natural history, and paleontology.

Paulie Pliosaurus - The Pteranodon family takes the Dinosaur Train underwater to visit a marine reptile called Paulie Pliosaurus, a creature known as the ""T. rex of the Ocean.""

Elmer Visits the Desert - Our Pteranodon family takes their ocean friend Elmer Elasmosaurus on the Dinosaur Train to a place he's never been before: the desert!

Shiny's Sea Shells - Shiny, with help from Buddy, Tiny, and Don, looks for the shiniest sea shells she can find, but ends up making a new friend named Henry, a hermit crab.

Jess Hesperornis - The Pteranodons venture to the Big Pond to find out if dinosaurs can live in the water.

The Old Spinosaurus and the Sea - Dad takes the kids on the Dinosaur Train to fish in a new place, where they meet a huge, grumpy old dinosaur, called a Spinosaurus, who doesn't want the kids in his sea.


Learning Elements - - Harnessing children's enthusiasm for and curiosity about dinosaurs, Dinosaur Train sparks 3-6 year old children's interest in life science and natural history. The show encourages children to compare the characteristics of ancient animals with those that are alive today. As they explore a variety of interesting animals past and present, children develop the inquiry skills and core knowledge needed to help them think, talk and act like scientists.

NOVA: Riddles of the Sphinx DVD

The Path to Violence DVD