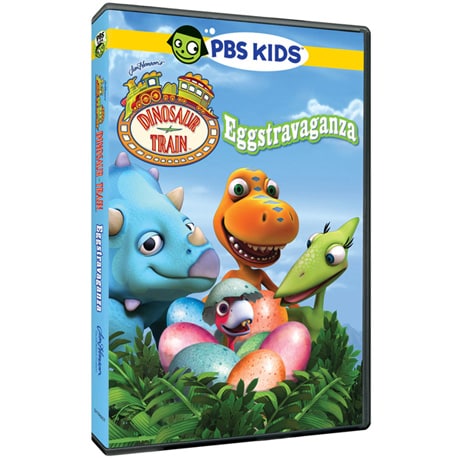 Dinosaur Train embraces and celebrates the fascination that preschoolers have with both dinosaurs and trains while sparking an interest in life science, natural history, and paleontology. Dinosaur Train - Eggstravanganza includes: Eggstravaganza, The Egg Stealer?, Hatching Party, Tank's Baby Brother, Diamond Anniversary, Nursery Car, All Kinds of Families, A Sea Turtle Tale, and The Good Mom.

The Egg Stealer? - Buddy and Don stumble upon a mystery when they find unhatched eggs on their beach. The mystery grows when some of the eggs are stolen. Don and Buddy become detectives and suspect that maybe Tiny, Shiny, or other friends may be stealing the eggs. They're not. Soon, all the kids join in to solve the mystery, as they figure out that the eggs belong to an over-protective, caring mom named Olivia Oviraptor who is just trying to keep her eggs safe.

Hatching Party - Buddy, Tiny and Mrs. Pteranodon ride the Dinosaur Train to attend an egg hatching party, where they meet their friend Cory Corythosaurus, who introduces them to her new brothers and sisters.

Tank's Baby Brother - Tank Triceratops has a new baby brother that everyone dotes on, making Tank feel left out. Buddy, Tiny, and Tank play with some older kid Triceratops, and Tank learns the perks of being a big brother.

Diamond Anniversary - Mr. and Mrs. Pteranodon decide to surprise each other with gifts on their anniversary. Despite some close calls, the kids help each of them to keep their gifts a secret until the perfect moment when the whole family can celebrate.

Nursery Car - When the family rides the Dinosaur Train, they learn that a new car has been added - a Nursery Car, with dozens of eggs in little, padded nests, attended by their expectant moms and dads. The kids watch the eggs hatch, and try to guess which hatchling goes with which dinosaur parent.

All Kinds of Families - When Buddy expresses his feelings about being adopted to Tiny and Mrs. Pteranodon, they tell him that he will always be a part of the Pteranodon family. Mom takes Buddy and Tiny to meet another adopted dinosaur kid named Sonny Sauroposeidon, a huge tall creature, now a part of tiny Mikey Microraptor's family. Buddy and Sonny bond over being adopted and knowing that they are both in adoptive families that are different species but still love and appreciate them.

A Sea Turtle Tale - Our Pteranodon family is on the beach watching small eggs hatch and baby Archelon turtles emerge, and start to swim away. Our family and Mr. Conductor get into the Dinosaur Train Submarine and follow the baby Archelons who discover their own facts of nature - that their mother doesn't stay with them after they're born, and that they will grow up to be giant-sized sea turtles.

The Good Mom - "Mom's" the word when Mrs. Pteranodon meets fellow mom Millie Maiasaura, who is a little too over-protective of her kids. The two moms compare mothering methods in a play date at the Big Pond.