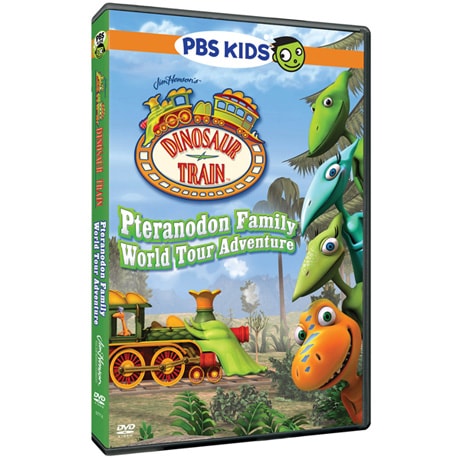 Gilbert the Junior Conductor - The kids play with Gilbert during their first full day on the train.

Confuciusornis Says - The next stop on the World Tour takes the Pteranodon family to Confuciusornis Gardens, where they meet a very wise old dinosaur.

Tiny's Tiny Doll - During a stop on the tour, Tiny accidentally leaves her beloved Tiny Doll behind in Velociraptor Valley. Valerie and Velma Velociraptor enlist the help of a wide-winged Pterosaur named Ziggy to fly Tiny's doll back to the train.

Iggy Iguanodon - The Pteranodon family meets Iggy Iguanodon, a large, four-legged chap who shows them his unique way of walking while leading them to some famous white cliffs.

Shiny Can't Sleep - Shiny gets homesick while the Pteranodon family continues on their World Tour. She tries to fall asleep in their Sleeping Car, but can't, so Dad takes her for a walk around the Dinosaur Train, where they observe the night activities of nocturnal creatures.

Don and the Troodons - The Pteranodon family oversleeps and has to hurry to make another guided walk on their World Tour!

Harnessing children's enthusiasm for and curiosity about dinosaurs, DINOSAUR TRAIN sparks 3-6 year old children's interest in life science and natural history. The show encourages children to compare the characteristics of ancient animals with those that are alive today. As they explore a variety of interesting animals past and present, children develop the inquiry skills and core knowledge needed to help them think, talk and act like scientists.