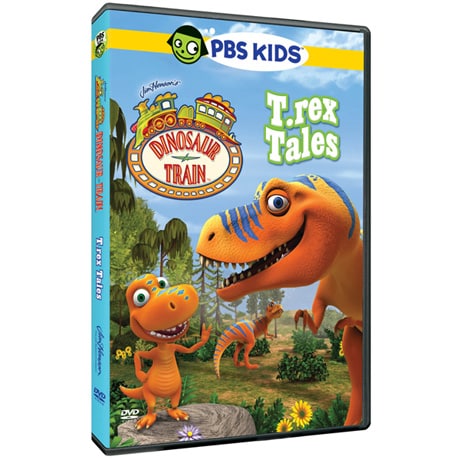 I'm a T-Rex! - Buddy travels to Rexville on the Dinosaur Train and meets Delores Tyrannosaurus and her daughter Annie. When he sees that he shares all the same features, Buddy learns that he is a Tyrannosaurus rex!

Armored Like an Ankylosaurus - The kids travel on the Dinosaur Train with Mr. Pteranodon to see his hero, Hank Ankylosaurus, play a game of Dinoball. Afterwards, they even get to play with Hank and learn what it's like to be a dinosaur that is covered with armored plates and has a mighty club for a tail.

T-Rex Teeth - When Buddy loses a tooth, Mom takes him to Rexville to ask his Tyrannosaurus friends all about T-Rex teeth. They explain that he'll grow new teeth to replace the old ones.

Buddy Explores the Tyrannosaurs - Buddy, an adopted T. rex, wishes he knew more about his T. rex ancestors. So, Dad takes him and Tiny on the Dinosaur Train back to the early Cretaceous, to visit an ancestor: an earlier version of Tyrannosaurus rex called Raptorex.

T-Rex Migration - Buddy and Tiny go to visit their friend Annie Tyrannosaurus and discover she isn't home, so they follow clues and find her on a migration with her family.

Play Date with Annie - Buddy is excited that his friend Annie Tyrannosaurus is coming to the Pteranodon nest to visit and play. After Tiny feels left out, Buddy and Annie show her that they can all be friends!

A Spiky Tail Tale - Buddy and Tiny help settle an argument between Morris Stegosaurus and Alvin Allosaurus, two very big dinosaurs - one with a very spiky tail, the other with a mouthful of sharp teeth.

Big Stomping Feet - Tiny is very worried after she loses Shiny's favorite shiny shell, and enlists Dad and Buddy to help find a new one. As Tiny becomes more frantic, she begins stomping with frustration. Then the kids meet Daphne, a Daspletosaurus kid who shows them how to make stomping a fun dance instead of a temper tantrum.

Don's Winter Wish - When the Pteranodon family travels back to the North Pole, Don declares that it's his "winter wish" to see snow fall again. When a big blizzard comes, and even the Dinosaur Train gets snowed in, Don worries that his wish brought the blizzard.