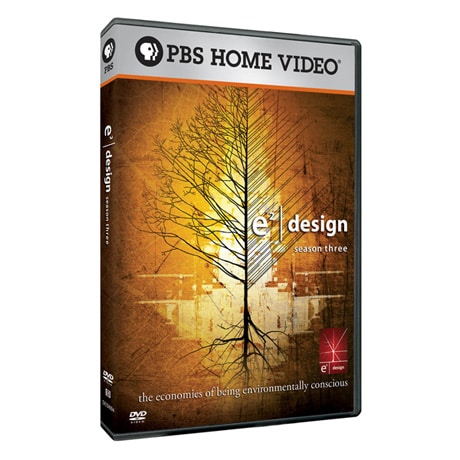 No Reviews Write the First Review
Item #: WB3032AV
Season Three of "e2: Design" features six more episodes of innovative Design. Learn how designers created green spaces in the urban jungle of Cairo, are fighting to rebuild the devastated 9th ward of New Orleans in the wake of Hurricane Katrina, and are creating architecture out of junked tires and appliances in Rotterdam, Netherlands. Each episode presents unique design challenges END_OF_DOCUMENT_TOKEN_TO_BE_REPLACED
Add to Wish List

Season Three of "e2: Design" features six more episodes of innovative Design. Learn how designers created green spaces in the urban jungle of Cairo, are fighting to rebuild the devastated 9th ward of New Orleans in the wake of Hurricane Katrina, and are creating architecture out of junked tires and appliances in Rotterdam, Netherlands. Each episode presents unique design challenges and triumphs which represent true innovation.

A Garden in Cairo

Cairo, a city of 16 million, is one of the most densely populated in the world, with only one square foot of green space per person prior to 2005. His Highness the Aga Khan, the spiritual leader of the Shia Imami Ismaili Muslims, saw the need to relieve this congestion. The result is Al-Azhar Park: a 500-year-old dump-turned-"urban lung" that provides much needed green space and a source of civic pride.

Architect Brian MacKay-Lyons grew up on the shipyards of Nova Scotia and borrows from that lean, economical building tradition in his architecture. From the Barn Yard in his village to the Canadian Embassy in Bangladesh, this episode presents a lesson in local vernacular  -  why it works and how it might be the most sustainable form of architecture there is.

By the mid-1970s, Melbourne was a dying city. People commuted in to work during the day, but downtown became a ghost town after 5 p.m. This episode explores how leadership and vision transformed the cityscape. Rob Adams, Melbourne's director of design and urban environment, gives a guided tour to show how the city first sought livability, then sustainability, and how the two are inextricably intertwined.

The Art & Science of Renzo Piano

World-class architect Renzo Piano draws on nature to create a structure that defines a natural history museum for the 21st century. Combining Piano's signature transparency design with a green roof evoking its surroundings, San Francisco's new California Academy of Sciences provides a model for sustainability, and sets a benchmark for how people use, operate and interact with public buildings.

In the wake of Hurricane Katrina, the citizens of New Orleans' Lower 9th Ward weren't about to watch their community disappear, even as government officials at all levels turned a blind eye to their plight. This story profiles community leaders fighting to rebuild the neighborhood sustainably, and the outsiders  -  including renowned architect Bob Berkebile, and organizations Global Green and Brad Pitt's Make It Right  -  who are working to make this possible.

The partners of 2012 Architecten in Rotterdam, The Netherlands, are making surplus superfluous, reusing everything from I-beams, wood floors, car tires, washing machines, stainless steel sinks and even windmill blades as building materials in their creations. 2012 Architecten's work suggests not only a new kind of aesthetic and functionality in sustainable architecture, but also a new approach to design.