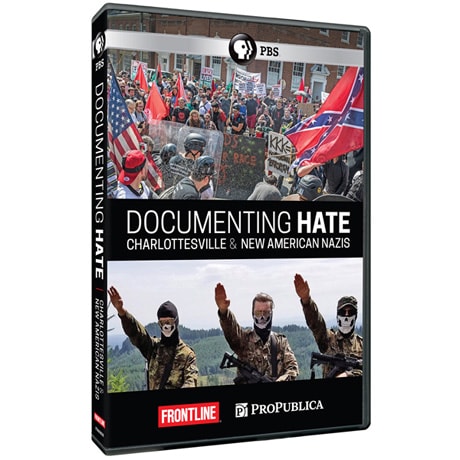 No Reviews Write the First Review
Item #: WB3782AV
Continuing FRONTLINE and ProPublica’s reporting on violent white supremacists in the U.S. (which has helped lead to multiple arrests), this joint investigation shows the group’s terrorist objectives and how it gained strength after the 2017 Charlottesville rally.
Add to Wish List

Continuing FRONTLINE and ProPublica’s reporting on violent white supremacists in the U.S. (which has helped lead to multiple arrests), this joint investigation shows the group’s terrorist objectives and how it gained strength after the 2017 Charlottesville rally.

FRONTLINE: Documenting Hate Since August 2017, FRONTLINE and ProPublica have been investigating the resurgence of violent white supremacists in America. In Documenting Hate: Charlottesville, correspondent A.C. Thompson methodically tracks down some of those at the center of the infamous and deadly rally in Charlottesville, Virginia - revealing that one participant in the violence was an active-duty Marine, and another worked for a major defense contractor and held a U.S. government security clearance. The investigation also shows just how ill-prepared law enforcement was to handle an influx of white supremacists from across the country, some of whom had been part of a series of earlier violent confrontations in California and descended on Charlottesville specifically to fight. FRONTLINE and ProPublica’s reporting on this story has led to multiple arrests.

Then, in the wake of the 2018 deadly anti-Semitic attack at the Tree of Life synagogue in Pittsburgh, FRONTLINE and ProPublica present the second film in this series, Documenting Hate: New American Nazis. It’s a new investigation into white supremacist groups in America - in particular, a neo-Nazi group, Atomwaffen Division, that has actively recruited inside the U.S. military. This joint investigation documents the group’s terrorist objectives, examines how civilian and military authorities have responded, and shows how the group gained strength after the 2017 Charlottesville rally.