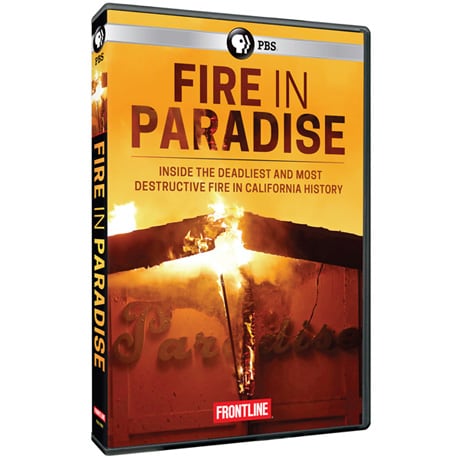 $24.99 $14.99
1 Review Write a Review
Item #: WB3892
Who's to blame for the devastating Camp Fire, and why was it so catastrophic? With accounts from survivors and first responders, this is the inside story of the most destructive fire in California history, its causes and the impact of climate change.
Eligible for Buy 5 for $49 select DVDs. Discount applies in cart.
Add to Wish List

Who's to blame for the devastating Camp Fire, and why was it so catastrophic? With accounts from survivors and first responders, this is the inside story of the most destructive fire in California history, its causes and the impact of climate change.

FRONTLINE: Fire in Paradise On November 8, 2018, the deadliest and most destructive fire in California history began. By the time it would finally be extinguished, the fast-moving Camp Fire had burned an area the size of Chicago, destroyed approximately 30,000 homes, decimated the town of Paradise, and killed 85 people.

Fire in Paradise shares tales of both miraculous escape and unfathomable loss - and raises tough questions about who and what are to blame for the fire’s catastrophic toll, drawing on firsthand accounts from survivors, first responders, and local authorities, as well as harrowing footage filmed by those in the path of the inferno. The film traces how the blaze was sparked by a failed power line belonging to the country’s largest energy company, PG&E - who had previously been warned that its transmission towers were aging and components might fail. The documentary also reveals how the blaze quickly overwhelmed the area’s firefighting resources - and how, even as the blaze hurtled towards Paradise at a rate of 80 football fields a minute, the town’s residents were being told the fire was not a danger when they called 911 to report smoke and ash. The film also investigates why many residents weren’t officially alerted to evacuate until it was too late - if at all.

Fire in Paradise examines how climate change has contributed to making fires bigger and more frequent.

5 star rating 1 Review
1 Review
N
Nikki
Anonymous User
5.0 star rating
07/17/20
Small towns and devastating fires
Review by Nikki on 07/17/20 review stating Small towns and devastating fires
This program was frightening because of the enormity of the fire that spread so quickly in the mountain town of Paradise. It is a lesson on how quickly fires spread and how we desperately need evacuation plans in case it happens where we live. Every fireman, CDF, police department and agency designed to assist the public in emergencies MUST see this program as well as people living in mountain communities. Please take an hour out of your day to watch Fire in Paradise. Youll see what the townspeople of Paradise had to go through in order to survive and realize it could very well happen to you.
FRONTLINE: Fire in Paradise DVD
Copyright © 2023 Public Broadcasting Service (PBS). All rights reserved.   PBS.org   PBS Mission   Privacy & Security   1-800-531-4727 1-833-565-0293