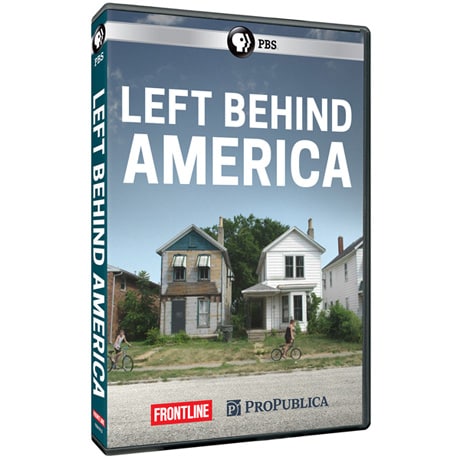 No Reviews Write the First Review
Item #: WB4122AV
Intimate stories of one Rust Belt city’s struggle to recover in the post-recession economy. FRONTLINE and ProPublica report on the economic and social forces shaping Dayton, OH, a once-booming city where nearly 35 percent now live in poverty.
Add to Wish List

Intimate stories of one Rust Belt city’s struggle to recover in the post-recession economy. FRONTLINE and ProPublica report on the economic and social forces shaping Dayton, OH, a once-booming city where nearly 35 percent now live in poverty.

FRONTLINE: Left Behind America In the decade since the Great Recession, many American cities and towns have bounced back. But for some small and mid-size cities that were once hubs for innovation and manufacturing, economic recovery has remained elusive.

FRONTLINE and ProPublica ask why - and present an in-depth look at one such city, Dayton, Ohio, as its citizens continue to fight for economic revitalization ten years after the financial crisis.

From director Shimon Dotan (The Settlers), Left Behind America was produced in partnership with Chasing the Dream, a multi-platform public media reporting initiative from WNET in New York that aims to provide a deeper understanding of both poverty and opportunity in American society.

Gripping and powerful, the documentary chronicles the lives and struggles of Dayton’s working poor as they chase the American dream in the new American economy. As Dotan and correspondent Alec MacGillis of ProPublica explore in the film, Dayton was once the epitome of industry and ingenuity in the American heartland.

The film shows, in cities like Dayton - where many businesses that once employed thousands of people have shut down or moved elsewhere - part-time, low-wage work rather than full-time work with benefits has often become the new normal. And as a result, many families struggle to survive. But despite the obstacles, many Dayton citizens are taking matters into their own hands - and focusing not just on surviving, but thriving.

Left Behind America is the intimate story of one Rust Belt city’s struggle to recover in the post-recession economy - and an up-close look at how that struggle presents a challenge to us all.

"Mayor Nan Whaley is interviewed along with business and industry figures, as well as citizens, in this profiles that offers a timely look at a key political background state. Recommended." - Video Librarian