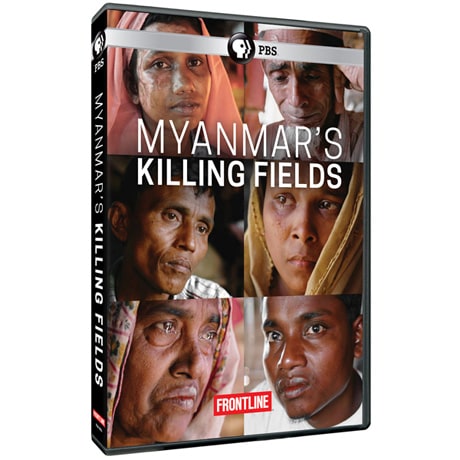 No Reviews Write the First Review
Item #: WB4282AV
Secret footage going back years shows the effort to kill and expel Rohingya Muslims from Myanmar. With accounts from victims and a whistleblower within the military, the film examines evidence that security forces committed crimes against humanity.
Add to Wish List

Secret footage going back years shows the effort to kill and expel Rohingya Muslims from Myanmar. With accounts from victims and a whistleblower within the military, the film examines evidence that security forces committed crimes against humanity.

FRONTLINE: Myanmar's Killing Fields With secret footage filmed by a network of citizen activists, and firsthand accounts from victims and their families, Myanmar’s Killing Fields is U.S. television’s most comprehensive investigation of the Myanmar military’s violent crackdown on the Rohingya Muslim minority - an effort that has been described by the UN as having the “hallmarks of genocide.”

The Myanmar military insists that its campaign was simply a counter-insurgency “clearance operation” targeted against a militant Islamist Rohingya group, ARSA, that had attacked and killed security forces at police and army bases. But with shocking footage filmed by citizen activists, the documentary depicts an orchestrated campaign to target civilians, state-sanctioned violence, and mass murder - and uncovers new accounts of atrocities against the Rohingya people, from mass rape of women and children, to babies and children thrown into fires.

The film also investigates the role of Aung San Suu Kyi, State Counsellor of Myanmar, in the crisis. The Nobel Laureate was once seen as Myanmar’s hope and a beacon for democracy - including by President Barack Obama, who lifted all sanctions on the country in 2016. But Suu Kyi, who has continued to defend her country from international criticism, has now been accused of standing by as her country’s military led an operation that killed thousands of civilians.

As of May 2018, almost one million Rohingya refugees from Myanmar are living in the world’s largest refugee camp across the border in Bangladesh. Myanmar’s Killing Fields is a vivid and harrowing look at what drove them there.