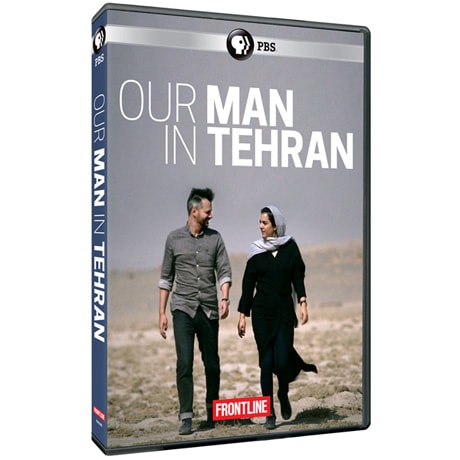 $24.99
3 Reviews Write a Review
Item #: WB4372
FRONTLINE: Our Man in Tehran Since 2001, Thomas Erdbrink has been covering front-page news from inside Iran. Now chief correspondent and Tehran bureau chief for The New York Times, he is one of the last   END_OF_DOCUMENT_TOKEN_TO_BE_REPLACED
Add to Wish List

FRONTLINE: Alaska Gold: A War of Resources: The Fish or the Mine? DVD

NOVA: Trapped in an Elevator DVD

FRONTLINE: Our Man in Tehran Since 2001, Thomas Erdbrink has been covering front-page news from inside Iran. Now chief correspondent and Tehran bureau chief for The New York Times, he is one of the last Western journalists living in the country. Over the course of four years beginning in 2014, he was able to get permission to travel with a crew from Dutch television around the country, meeting people and hearing stories about their lives and hopes and fears, in one of the most isolated countries in the world.

FRONTLINE presents Erdbrink's rare and fascinating account in Our Man in Tehran - a four-hour journey into the private world of Iran, revealing the people and the country in a way never before seen on U.S. television. The series offers surprising encounters inside the closed society of Iran, as Erdbrink gets Iranians to reveal the intricacies of their private worlds and the challenges of living under theocratic leaders.

Knowing his way around, speaking Persian, and with unprecedented filming access, Erdbrink starts his journey with his Iranian friends and family, who are his introduction to the culture. The film widens out into his daily life as a reporter, watching and listening as Iran goes through a rollercoaster of changes, with a modernizing society increasingly pitted against ideologically conservative Muslim clerics.

Along the way, the series introduces a view of Iranian society that will both surprise and intrigue viewers - inside a 12-step AA meeting in a country where drinking alcohol is banned; following a young woman who decides to challenge the compulsory Islamic headscarf law; experiencing the explosive popularity of Instagram among a new generation of Iranians; or meeting a volunteer soldier who has just come back from multiple tours in Iraq and Syria and talks about martyrdom with his wife and young children nearby.

Behind the personal stories, Our Man in Tehran offers a serious look at whether this important country can open up to the world - and explores how its leaders' harsh rhetoric against America often differs from the beliefs of ordinary Iranians.

Willie Velasquez: Your Vote is Your Voice DVD

The Farthest - Voyager in Space

Great Performances: Bernstein at 100: The Centennial Celebration At Tanglewood DVD