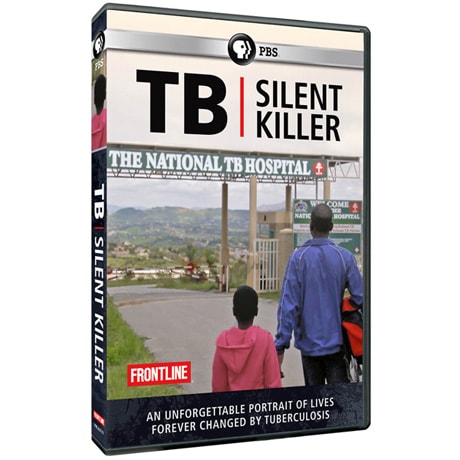 $24.99
2 Reviews Write a Review
Item #: WB4692
FRONTLINE: TB Silent Killer Tuberculosis was once thought to be a disease of the past. But with more than 8 million new infections every year, virulent new drug-resistant strains emerging faster than   END_OF_DOCUMENT_TOKEN_TO_BE_REPLACED
Add to Wish List

Ken Burns: Lewis & Clark: The Journey of the Corps of Discovery DVD

Tuberculosis was once thought to be a disease of the past. But with more than 8 million new infections every year, virulent new drug-resistant strains emerging faster than ever, and outbreaks occurring across the world (including in Europe and the United States), TB - passed simply by a cough or a sneeze - has become the second leading cause of death from an infectious disease on the planet.

In this special FRONTLINE documentary, filmmaker Jezza Neumann travels to Swaziland, the country with the world's highest incidence of TB. With startling intimacy and emotion, TB Silent Killer delivers an unforgettable portrait of the people living at the pandemic's epicenter. Through the intimate stories of people battling TB, as well as the nurses and the doctors who are fighting to save their lives despite the stigma and infection threat they face for doing so, Neumann delivers a haunting, powerful look at this disease's human toll, and sounds an alarm for us all.

Secrets of the Dead: After Stonehenge DVD