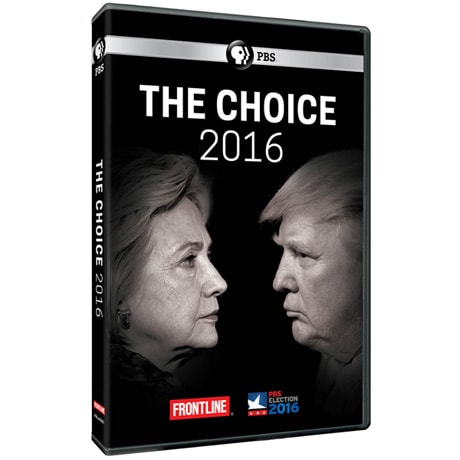 $24.99
10 Reviews Write a Review
Item #: WB4772
FRONTLINE: The Choice 2016 Hillary Clinton and Donald Trump are two of the most polarizing presidential candidates in modern history. Filmmaker Michael Kirk goes behind the headlines to investigate what   END_OF_DOCUMENT_TOKEN_TO_BE_REPLACED
Add to Wish List

The Best of Agatha Christie Volume One DVD

NOVA: Treasures of the Earth DVD

Hillary Clinton and Donald Trump are two of the most polarizing presidential candidates in modern history. Filmmaker Michael Kirk goes behind the headlines to investigate what has shaped these two candidates, where they came from, how they lead, and why they want to take on one of the most difficult jobs imaginable.

This two-hour interwoven investigative biography of Clinton and Trump draws on dozens of interviews from those who know the candidates best - friends and family, advisors and adversaries - as well as authors, journalists, and political insiders. What emerges is a deeply reported narrative arc of both candidates' lives, side by side, with trustworthy journalism and powerful new insights at a moment when voters are being bombarded with conflicting partisan stories about each candidate. From their childhoods, to their college experiences, to their tumultuous careers, FRONTLINE investigates formative moments in the lives of Donald Trump, who has challenged the establishment at every turn, and Hillary Clinton, who has become the first female presidential nominee.

The Choice 2016 gives viewers a new understanding of the two people who are fighting to lead America - and is essential viewing for every American looking to make an informed choice on November 8, 2016.

NOVA: Rise of the Rockets DVD

FRONTLINE: To Catch a Trader DVD