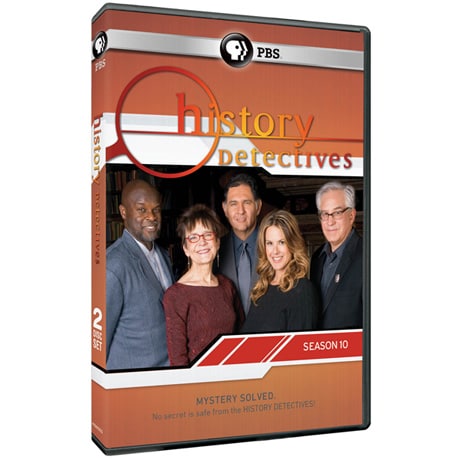 Wesley Cowan, independent appraiser and auctioneer; Gwendolyn Wright, historian and professor of architecture, Columbia University; Elyse Luray, independent appraiser and expert in art history; Dr. Eduardo Pagán, professor of history and American studies at Arizona State University; and Tukufu Zuberi, professor and chair of sociology and the Lasry Family Professor of Race Relations at the University of Pennsylvania leave no stone unturned as they travel around the country to explore the stories behind local folklore, prominent figures, and family legends.

Episode #1001 - In the 10th season premiere episode, Elyse Luray and Wes Cowan investigate whether they have found the long-lost electric Fender Stratocaster Bob Dylan plugged in at the '65 Newport Folk Festival. Tukufu Zuberi tracks down some autographs allegedly signed during the Beatles' legendary 1964 tour of the United States. Finally, Gwendolyn Wright investigates a $5 thrift store find and unearths a little-known artistic side of musical iconoclast Frank Zappa.

Episode #1002 - Wes Cowan hunts for the identity of a man whose name is engraved on a rare matched set of Civil War-era pistols. Tukufu Zuberi tracks down the story behind an old 78rpm, distributed by K.K.K. Records. And Eduardo Pagán tries to prove that James Jamerson, a bass player whose bass line drove the Motown sound, owned a battered Ampeg B-15 amp that the Rock and Roll Hall of Fame will display.

Episode #1003 - Host Elyse Luray floors country music singer Clint Black with the information she uncovers about his turn-of-the-20th-century book of wanted posters. Then, can Eduardo Pagán link a chunk of molten metal to the B-25 Bomber that crashed into the Empire State Building in 1945? Did History Detectives find a slide of Bettie Page, ""Queen of Pinups,"" that somehow escaped the censorship of the 1950s? Finally, a six-foot metal bar tells the story behind the original iconic Hollywood sign.

Episode #1004 - What does the evocative symbol of a bird dropping a bomb mean? Did two patches with the symbol belong to a World War II unit? Then, Gwen Wright connects a tiny swatch of tattered red fabric to a pivotal moment in U.S. Civil War history. Did a neckpiece and leggings once belong to Chief Black Kettle, known as a Cheyenne Peace Chief? Finally, did President Lincoln actually sign this note?

Episode #1005 - Was a picture frame crafted from the staircase banister of the Titanic, the Lusitania, or neither? Then Tukufu wonders whether these Woolworth signs were part of the scene at the 1960 Winston-Salem lunch-counter sit-ins. And, for 70 years these toy soldiers have haunted their owner with a question: was the father of his childhood friend a Nazi spy?

Episode #1006 - Can History Detectives return the diary of a fallen North Vietnamese soldier to that veteran's family? U.S. Defense Secretary Leon Panetta takes part in the exchange. Then an Indiana man wonders if his rich uncle earned money bootlegging during the Prohibition. And, what can this ledger tell us about how Hollywood treated Native American actors?

Episode #1007 - What are the details behind the heroic acts pictured in a poster about two African American soldiers in World War I? U.S. Senator Charles Schumer helps us find the answer. Then, do we have a hand-drawn map of Valley Forge that George Washington used? And, does a Tucson man own one of the first transistor radios ever made?