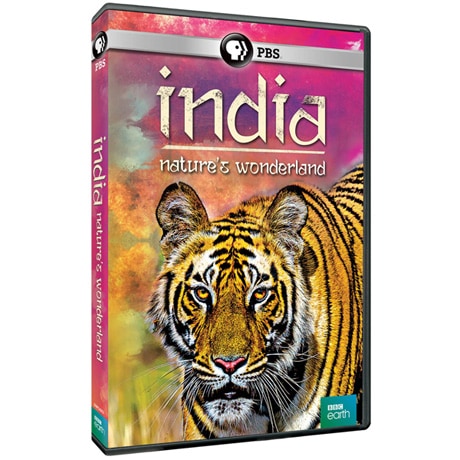 It's home to over a billion people. Yet India is a place where you can see animals that exist nowhere else on Earth, where the natural world has been woven   END_OF_DOCUMENT_TOKEN_TO_BE_REPLACED
Add to Wish List

It's home to over a billion people. Yet India is a place where you can see animals that exist nowhere else on Earth, where the natural world has been woven into people's lives and where wilderness still holds strong. Wildlife expert Liz Bonnin, actor Freida Pinto (Slumdog Millionaire) and mountaineer Jon Gupta reveal the wonders of India's natural world. From the Valley of the Flowers in West Himalaya and turtles hatching on the beaches of the east coast to the lions of the Gir forest, India: Nature's Wonderland reveals a land packed full of unrivalled wildlife experiences.

Part 1
Liz Bonnin visits the Gir Forest, home to the world's last Asiatic lions, where she witness two females hunting, before watching elephants walking through a tea plantation. Freida meets a man who has dedicated his life to the Hoolock gibbon, India's only ape, which starts the morning by singing. Jon climbs into the Himalayas and stops off at Debprayag to bathe in the sacred waters at a holy place where the River Ganges begins.

Part 2
Every winter morning the desert town of Khichan is invaded by thousands of Demoiselle Cranes. Liz can hardly believe the number of birds. Freida needs to ride on an elephant to get close to one of India's rarest sights - the One Horned Rhino. Not only does she get to see one in the tall grass, she also sees its baby. Jon comes down from the mountains to a beach on the Bay of Bengal to witness the mass hatching of Olive Ridley Turtles, more than a million baby turtles will erupt from nests buried in the sand.

Due to limited US rights, this product is not available for shipping to Canada.

Breakthrough: The Ideas That Changed the World DVD