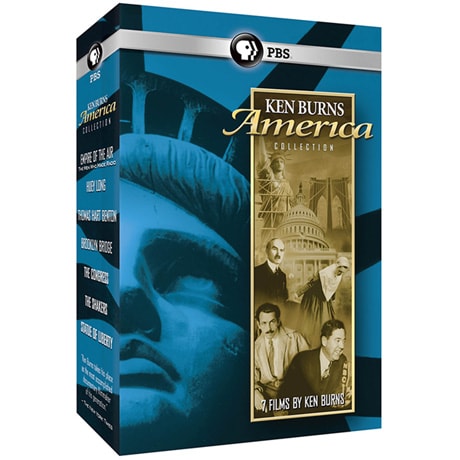 No Reviews Write the First Review
Item #: WB6422AV
Seven documentaries by Ken Burns offer an anthem to the nation and its people. "Brooklyn Bridge" and "Statue of Liberty" recalls the building of two New York edifices. "Empire of the Air" recounts the creators of radio, while "The Congress" depicts a unique American institution. Artist "Thomas Hart Benton" and politician "Huey Long" emerge in compelling biographies, while "The Shakers" END_OF_DOCUMENT_TOKEN_TO_BE_REPLACED
Add to Wish List

Seven documentaries by Ken Burns offer an anthem to the nation and its people. "Brooklyn Bridge" and "Statue of Liberty" recalls the building of two New York edifices. "Empire of the Air" recounts the creators of radio, while "The Congress" depicts a unique American institution. Artist "Thomas Hart Benton" and politician "Huey Long" emerge in compelling biographies, while "The Shakers" is a moving tribute to an enduring religious experiment.

Ken Burns' America Collection is a compilation of seven outstanding documentaries by Ken Burns offer and anthem to the nation and its people.

Brooklyn Bridge - This award-winning film recaptures the drama, struggles, and personal tragedies behind the greatest of all achievements of America's industrial age, The Brooklyn Bridge. Largest bridge of the era, its construction entailed enormous problems and ingenious solutions. Witness the human heroics behind the bridge that seized America's imagination in the 1880s. Discover the enduring charm and beauty of a granite-and-steel masterpiece.

Statue of Liberty - Ken Burns presents the definitive portrait of America's great lady, in a program nominated for an Oscar and an Emmy. Follow the American icon's life, from creation by French sculptor Auguste Bartholdi through painstaking construction and accident-prone 1886 dedication. Interviews with ordinary Americans reveal the unique place the statue holds in our hearts.

Empire of the Air - Follow the story of radio's creation of radio and three men of genius, vision, and determination: Lee De Forest, a clergyman's flamboyant son; Edwin Howard Armstrong, a brilliant, withdrawn inventor; and David Sarnoff, a hard-driving Russian immigrant who created the world's most powerful communications company. This film evokes the lives of three men whose work profoundly transformed modern America.

The Congress - Ken Burns profiles a durable American institution in his elegant, penetrating portrait of the U.S. Congress. Narrated by David McCullough, the film uses historic footage and interviews with ""insiders"" David Broder, Alistair Cooke, and Cokie Roberts to detail the first 200 years. The film chronicles careers of notable members and charts the continuing growth of the Capitol building, in readings from diary entries, letters, and famous speeches.

Thomas Hart Benton - One of America's best-known, least-understood painters was Thomas Hart Benton. Ken Burns traces the pioneering artist's turbulent career in this bittersweet portrait, highlighting the fierce controversy over his work. The film combines rare archival material, commentary by those close to the artist, and a stunning selection of Benton's superb paintings and murals to create a moving profile of the 20th-century genius.

Huey Long - No one captures the American imagination quite like the Kingfish. Ken Burns' film traces Huey Long's spectacular career from the 1920s, bursting out of Louisiana under the banner ""Every man a king."" Archival footage depicts the charismatic builder of roads, bridges, and schools, whose brutal corruption ended in a hail of bullets. Interviews tell the stories of the people swept up in Long's whirlwind, who still feel his impact on their lives.

The Shakers - A poignant film portrays 200 years of Shaker life in America, guided by recollections of three surviving members and archival material. Explore every aspect of a strange, noble sect that produced some of the greatest architecture and furniture in U.S. history. This story of devotion, invention, ingenuity, simple crafts, and dance was filmed at existing Shaker locations, with music re-created from authentic songs.