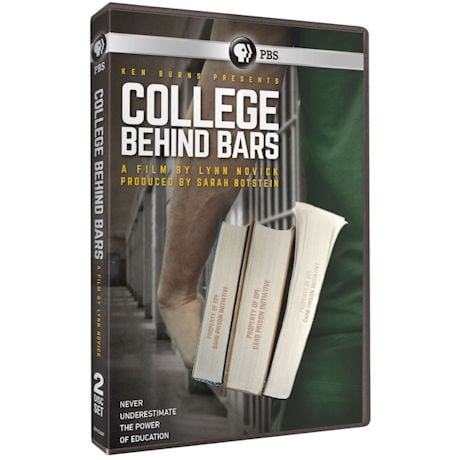 $29.99
2 Reviews Write a Review
Item #: WB6442
COLLEGE BEHIND BARS, a four-part documentary film series, tells the story of a small group of incarcerated men and women struggling to earn college degrees and turn their lives around in one of the most   END_OF_DOCUMENT_TOKEN_TO_BE_REPLACED
Add to Wish List

COLLEGE BEHIND BARS, a four-part documentary film series, tells the story of a small group of incarcerated men and women struggling to earn college degrees and turn their lives around in one of the most rigorous and effective prison education programs in the United States - the Bard Prison Initiative (BPI).

Shot over four years in maximum and medium security prisons in New York State, the four-hour film takes viewers on a stark and intimate journey into one of the most pressing issues of our time - our failure to provide meaningful rehabilitation for the over two million Americans living behind bars. Through the personal stories of the students and their families, the film reveals the transformative power of higher education and puts a human face on America's criminal justice crisis. It raises questions we urgently need to address: What is prison for? Who has access to educational opportunity? Who among us is capable of academic excellence? How can we have justice without redemption?

"He's very tough on me." Some BPI students, such as Rodney, train to become writing tutors and work with others to hone their skills.

"We end up having each other's backs." BPI students in every prison cultivate a supportive community.

"The Do-Everything pan." Tamika, Shiloh and Shawnta explain how they are able to cook and what they eat, while incarcerated.

"Comma, semicolon, em dash." Giovannie and Chris reflect on how theyexpress themselves in their letters home.

"What does tragedy mean?" Chris and Shiloh, taking a class on the history of tragedy, talk about how texts by Sophocles and Shakespeare resonate for them.

"The Declaration of Freedom from Judgment." Inspired by Thomas Jefferson's Declaration of Independence and other historic American manifestos, Giovannie reads his own declaration.

Orientation Every summer, a new cohort of students is admitted to BPI and welcomed at Orientation, where they begin to appreciate what is expected of them.

Senior Project Practice In a seminar setting, the BA students present their Senior Project research and offer critiques to each other.

Mandarin Students introduce themselves in Mandarin and sing the anthem of the 2008 Beijing Olympics.

Secrets of the Dead: The Lost Gardens of Babylon DVD