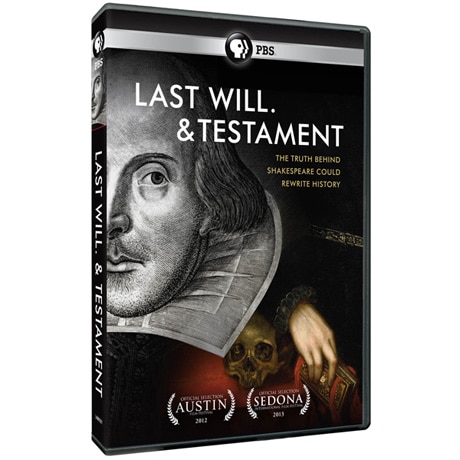 $24.99 $19.98
8 Reviews Write a Review
Item #: WB6682
It's the greatest literary mystery of all time: Who wrote the works of William Shakespeare? Although the official story of a Stratford merchant writing for the London box office has held sway for centuries, questions over the authorship of the plays and poems has persisted. Mark Twain, Sigmund Freud, Charlie Chaplin, and Orson Welles are among the many famous figures END_OF_DOCUMENT_TOKEN_TO_BE_REPLACED
Add to Wish List

It's the greatest literary mystery of all time: Who wrote the works of William Shakespeare? Although the official story of a Stratford merchant writing for the London box office has held sway for centuries, questions over the authorship of the plays and poems has persisted. Mark Twain, Sigmund Freud, Charlie Chaplin, and Orson Welles are among the many famous figures who doubt that a grain-dealer from Stratford-Upon-Avon was England's 'Star of Poets'.

Derek Jacobi leads an impressive cast featuring Oscar®-winning actress Vanessa Redgrave and Tony® Award-winning actor Mark Rylance on a quest to uncover the truth behind the world's most elusive author, and discovers a forgotten nobleman whose story could rewrite history.

4.6 star rating 8 Reviews
8 Reviews
Z
Zan G.
Anonymous User
5.0 star rating
07/17/20
Clear and Cogent
Review by Zan G. on 07/17/20 review stating Clear and Cogent
A clear and cogent presentation of the Oxfordian argument. Orthodox scholars look pretty silly in maintaining that there is no reasonable doubt that the Stratford man wrote the plays and poems. The case against Shakspere is overwhelming. The case for Edward de Vere is convincing, and getting stronger every year.
Last Will. & Testament DVD
N
Nobody
Anonymous User
3.0 star rating
07/17/20
SAW THE PROGRAM, BOUGHT DVD AS A BIRTHDAY GIFT.
Review by Nobody on 07/17/20 review stating SAW THE PROGRAM, BOUGHT DVD AS A BIRTHDAY GIFT.
THE SUBSTANCE IS ALL IN THE TITLE. I DONT DO CRITIQUES OF LITERARY MATERIAL.
Last Will. & Testament DVD
T
The W.
Anonymous User
5.0 star rating
07/17/20
A New Look at the Man we Call Shakespeare
Review by The W. on 07/17/20 review stating A New Look at the Man we Call Shakespeare
After reading numerous books reinforcing the same old stories trying - with many qualifiers on the facts - to link up a moderately literate man from Stratford with the glorious words of the greatest poet and dramatist in the English language, this dvd makes the most unstrained and compelling case for the Earl of Oxford. No stretching. No painful forcing of the facts. The dvd is beautifully presented, well argued and handsomely mounted. Terrific.
Last Will. & Testament DVD
O
Outlook
Anonymous User
4.0 star rating
07/17/20
conspiracy theories.
Review by Outlook on 07/17/20 review stating conspiracy theories.
Very interesting show about how some people have developed the idea that william shakespeare is in fact not the writer behind all the shakspearian plays and poems. it is equally interesting to see how normally intelligent people can fall prey to yet another groundless conspiracy theory.
Last Will. & Testament DVD
B
Brad I.
Anonymous User
5.0 star rating
07/17/20
I would buy this DVD again and again
Review by Brad I. on 07/17/20 review stating I would buy this DVD again and again
Never be a naysayer, ...but this convinces me. No Bard from Stratford on Avon COULD HAVE conceived the broad scope of these works without having those varied experiences. ......Which the W. Shakespeare did not have.
Last Will. & Testament DVD
N
Nancy
Anonymous User
5.0 star rating
07/17/20
Very convincing!
Review by Nancy on 07/17/20 review stating Very convincing!
This is one of the better discussions of the authorship question. Those supporting alternatives to the man from Stratford present very convincing arguments. Good evidence is provided, and those speaking are reliable and trustworthy, but as a Stratfordian, I am not persuaded to join their camp.
Last Will. & Testament DVD
D
Dr M.
Anonymous User
5.0 star rating
07/17/20
Detailed Overview of Oxfordian Case
Review by Dr M. on 07/17/20 review stating Detailed Overview of Oxfordian Case
Nothing is new about the scholarly arguments from the Oxfordian view point (someone other than Wm. Shakespeare wrote the 37 plays attributed to the man from Avon)and the Cambridge view point (Wm. Shakespeare is definitely the author of the 137 plays hes credited for). What is new is the splendid motion picture about this centuries long controversy, Anonymous (staring Rhys Ifans as the 17th Earle of Oxford; Vanessa Redgrave as Queen Elizabeth I; Joely Richardson as younger Queen Elizabeth I; Derek Jacobi who explains this historical dilemma; etc...). Last Will. Testament is the documentary exploration by scholars and the worlds most renowned actors of plays attributed to the writer beknighted the greatest author of all time in the English language: Wm. Shakespeare. Redgrave, Jacobi and Richardson are among the notable actors who present very tight arguments (for the Oxfordian case), along with major scholars of literature, culture and the writings of Shakespeare, in particular. By now, there is a huge ground swell majority of the masses that no longer believes the grain merchant man from Stratford at Avon, who came to be known as Shakespeare, could have possibly authored either the plays or sonnets attributed to him; instead, believing the Edward de Vere, the 17th Earle of Oxford is the author. Last Will. Testament is a 90 some minute meticulous examination from both viewpoints that is quite exciting as it rattles the sabers that help to unearth very convincing truths-facts-data which support the Edward de Vere as the most predominant English playwright of the Renaissance up to this date in 2013. After studying the issue for years, both films, Anonymous, and this one, Last Will.... are finally shinning a great deal of light onto a most significant literary controversy.
Last Will. & Testament DVD
W
William R.
Anonymous User
5.0 star rating
07/17/20
Cracking the Myth About Shakespeare
Review by William R. on 07/17/20 review stating Cracking the Myth About Shakespeare
One of the most important literary documentaries ever made, on literatures most repressed probability: that our received myth of a Stratford-upon-Avon phenom was a highly-placed, politically-driven bamboozle from the start. The academic lions look like fools trying to make the myth credible and seem to have no idea their purpose as intellectuals is to seek the truth and unmask falsehood, not protect tradition. The critics have much the more reasonable analysis. What may be missed in the historical controversy likely to ensue is that this film is an aesthetic tour-de-force, inspired by a compelling sense of truth from first moment to last. Recommended for high school, college, and all lovers of Shakespeare. The author need not be buried any longer in a confused, out-dated lie.
Last Will. & Testament DVD
Copyright © 2023 Public Broadcasting Service (PBS). All rights reserved.   PBS.org   PBS Mission   Privacy & Security   1-800-531-4727 1-833-565-0293