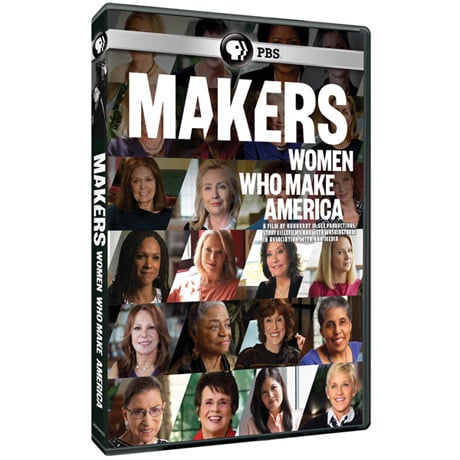 $29.99
28 Reviews Write a Review
Item #: WB6942
Review the story of how women have helped shape America over the last 50 years through one of the most sweeping social revolutions in our country's history, in pursuit of their rights to a full and fair share of political power, economic opportunity and personal autonomy.
Add to Wish List

Review the story of how women have helped shape America over the last 50 years through one of the most sweeping social revolutions in our country's history, in pursuit of their rights to a full and fair share of political power, economic opportunity and personal autonomy.

MAKERS: Women Who Make America tells the story of how women have helped shape America over the last 50 years through one of the most sweeping social revolutions in our country's history, in pursuit of their rights to a full and fair share of political power, economic opportunity and personal autonomy. Narrated by Meryl Streep, the documentary builds on the unprecedented multi-platform video experience from PBS and AOL, MAKERS.com, which launched in February 2012. Leveraging the combined reach of television and the internet, the project shares the stories of exceptional women whose pioneering contributions continue to shape the world in which we live.

Awakening - The story of the birth of the modern Women's Movement. The hour is framed by two important publications - The Feminine Mystique and Ms. Magazine - and by the women who authored them: Betty Friedan and Gloria Steinem. When Friedan's book came out in 1963, millions of American women had become uneasy under the constraints of 1950s post-war culture, which confined them to the home or to low-paying, dead-end jobs. The Feminine Mystique was, in the words of one reviewer, ""a brick through the rose colored picture window of the American suburban bungalow."" At the same time, another group of women - younger and more radical - were emerging from the anti-war and civil rights movements determined to achieve their own revolution in American society. By the time Steinem founded Ms. Magazine in the early 1970s, these two streams of women had converged to create the modern Women's Movement. Pivotal moments range from the early legal challenges brought by flight attendants and a rural Georgia telephone operator to the protests at the Miss America pageant and the takeover of the offices of Ladies Home Journal. It is a story filled with the spirit, humor and courage of a revolutionary generation.

Changing the World - The Women's Movement begins to break out of the campuses and urban centers where it originated to affect nearly every man, woman and child in America. In the early 1970s, feminism became a force that reshaped the relationships between men and women in the most fundamental ways. Divorce rates spiked as women chafed under their traditional roles but, where men could adapt, marriages became stronger than ever. With the widespread adoption of the contraceptive pill, women's sexuality was freed from the constant worry over pregnancy. At the same time, the Movement targeted states' restrictive abortion laws, culminating in the epochal Roe vs. Wade decision in 1973. Riding a wave of victories, the Movement aimed for the ultimate victory - passage of a constitutional amendment recognizing women's equality. But, just as passage seemed assured, a conservative backlash led by Phyllis Schlafly doomed the Equal Rights Amendment (ERA) and put an end to the Movement's unbroken string of victories. After 1980, the speeches and marches were largely over, but women continued to push for economic and social equality in America.

Charting a New Course - A focused look at the workplace, where individual women crashed through the glass ceiling, and to the courts, where they waged a battle against the ""hidden injuries"" of battery, harassment and rape. Two women - in very different ways - asserted women's control over their own bodies. When Anita Hill reluctantly stepped forward to accuse Supreme Court nominee Clarence Thomas of sexual harassment, she brought the issue out of the shadows. At the same time, pop superstar Madonna asserted a naked and aggressive sexuality, outside the control of men. However, even as the Movement achieved long-sought goals, a new generation of women were re-evaluating some of its most basic assumptions, especially the balance between work and family. By the 2000s, the movement was again under attack from conservatives seeking to rollback abortion and contraception laws, and by younger women fleeing the very word ""feminism."" But the Movement is far from over, as new fronts in the struggle have opened up, especially overseas.