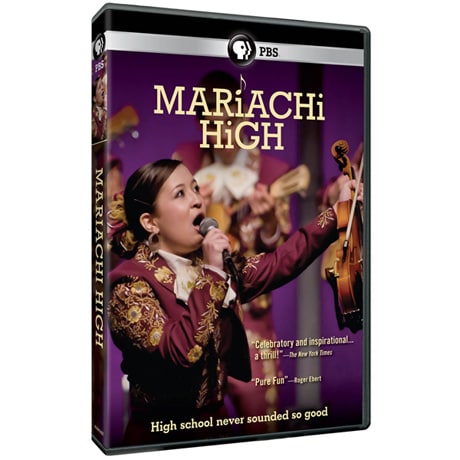 $24.99
4 Reviews Write a Review
Item #: WB6952
In a part of America that rarely makes headlines, there is a small town with a group of teenagers who will captivate your ears and warm your heart. Watch a year in the life of the champion mariachi ensemble at Zapata High School in South Texas. As they compete and perform with musical virtuosity, these teens and the music they END_OF_DOCUMENT_TOKEN_TO_BE_REPLACED
Add to Wish List

In a part of America that rarely makes headlines, there is a small town with a group of teenagers who will captivate your ears and warm your heart. Watch a year in the life of the champion mariachi ensemble at Zapata High School in South Texas. As they compete and perform with musical virtuosity, these teens and the music they make will inspire, surprise, and bring you to your feet. High school never sounded so good.

Bonus Feature Descriptions…
CHARLIE MARTINEZ: a mariachi freshman - For his first day of high school, Carlos ""Charlie"" Martinez irons his jeans and refreshes his cologne. Over the next several months, he'll go from nervous ""fishie"" to school mascot, and the only vocalist to represent Zapata High School at a national mariachi competition.

BELEN PADILLA: coming of age the Mexican way - For most girls in Zapata, Texas, turning 15 doesn't just mean blowing out the candles. Belen Padilla, mariachi vocalist, daughter of the mariachi director, and master of hip movement, celebrates her quinceanera in high style, complete with a mass, 3 dress changes, and a specially choreographed dance.

ZAPATA COUNTY FAIR: best little fair in Texas - Tex meets Mex at the annual Zapata County Fair, where the town shows off its rural heart. Mariachi students Eloy Martinez and Jennifer Santos demonstrate another extracurricular side as they participate in the Future Farmers of America auction, selling their hand-raised farm animals to the highest bidder.

STUDENT UPDATE: fulfiilling their dreams - Nine months after the completion of production, the students of 2011's Mariachi Halcon are growing up. Catch up on where they are today.

THIS IS ZAPATA, TEXAS - Zapata, Texas (population 5089) is a small Texas town on the Rio Grande, 200 miles south of San Antonio and 400 miles southwest of Houston. The population is 95% Latino, and, interestingly, boasts the most hangliding world records in the world. The visual tour starts here.

MARIOKI SING ALONG ""ALMA LLANERA"" - Alma Llanera, sung by Eloy Martinez in Mariachi High, is a famous mariachi song written in 1914. Recorded by many vocalists including Placido Domingo, it's considered the unofficial ""second anthem"" of Venezuela, and is often sung at parties and social gatherings. Sing along with Eloy and Mariachi Halcon as the lyrics come up on the screen.

DO RE MI - Home and school, on-stage and off, before and after: witness an entire mariachi school year, teased in the vocal warmup Maria Von Trapp made famous.

PROMO - Get a sneak peek and listen to Mariachi High! and Spanish (SDH)

4.7 star rating 4 Reviews
4 Reviews
M
M L.
Anonymous User
4.0 star rating
07/17/20
Surprising find
Review by M L. on 07/17/20 review stating Surprising find
This video shares a part of life in Texas that I did not know exists. It will provide my students with a look at culture that shows them how these teens are similar to them...with the same dreams and hopes. I love that it shows that the arts play a vital part of a schools curriculum because sometimes lawmakers forget that. I especially love the extras that are included. A great addition to my video resources!
Mariachi High DVD
C
Catlover J.
Anonymous User
5.0 star rating
07/17/20
Absolutely Heartwarming Music Of Mexico
Review by Catlover J. on 07/17/20 review stating Absolutely Heartwarming Music Of Mexico
A wonderful documentary of Texas high school mariachi competitions, focused on Zapata,Texas High School on the Rio Grande river across from Mexico. The music is exciting, the kids are enthusiastic. Make one proud to be an American and to share in this traditional Mexican musical experience.
Mariachi High DVD
M
Miguelito A.
Anonymous User
5.0 star rating
07/17/20
Music is outstanding !!!
Review by Miguelito A. on 07/17/20 review stating Music is outstanding !!!
Great show -- the student worked very hard to get to the final showdown !!
Mariachi High DVD
G
Gfjorge
Anonymous User
5.0 star rating
07/17/20
OMG!
Review by Gfjorge on 07/17/20 review stating OMG!
Its truly beautiful. I have watched it so many times, I can sing in fluent Spanish!
Mariachi High DVD
Copyright © 2022 Public Broadcasting Service (PBS). All rights reserved.   PBS.org   PBS Mission   Privacy & Security   1-800-531-4727 1-833-565-0293