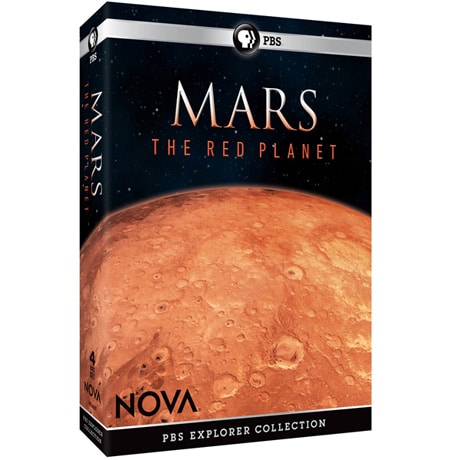 $39.99 $29.99
3 Reviews Write a Review
Item #: WB6982
This PBS Explorer Collection includes…
Go inside Mission Control and explore the Red Planet with rovers Spirit & Opportunity, from behind-the-scenes looks at the twin robot geologists before they were launched toward Mars at 12,000 miles per hour to the dramatic "six minutes of terror" as they prepare to land. And as the rovers' findings continue to shed light on END_OF_DOCUMENT_TOKEN_TO_BE_REPLACED
Add to Wish List

This PBS Explorer Collection includes…
Go inside Mission Control and explore the Red Planet with rovers Spirit & Opportunity, from behind-the-scenes looks at the twin robot geologists before they were launched toward Mars at 12,000 miles per hour to the dramatic "six minutes of terror" as they prepare to land. And as the rovers' findings continue to shed light on an alien world, take a closer look at how close human travel to Mars really is.

Can We Make it to Mars? - A trip to Mars and back could take two to three very difficult years, and NOVA scienceNOW wonders whether humans could survive such a journey - fraught with deadly meteoroids, bone and muscle wasting, and perilous levels of radiation. So as the Mars rovers continue to demystify the Red Planet, scientists are developing new ways to keep astronauts alive for the journey: streamlined space suits and gourmet space food, to start. But will it be enough? What if a plasma rocket could cut the journey down to a couple of weeks? (Subtitles in English (SDH)

Is There Life on Mars? - Years after they landed on Mars, NASA's twin robot explorers, Spirit and Opportunity, have lasted 16 times longer and driven 20 times farther than expected. Today they are joined by an aerial armada of hi-tech satellites, surveying Mars from orbit to reconstruct the planet's mysterious history. And in 2008, they also got company on the ground: NASA's Phoenix probe. Take a look at revelations from a planet, once alien, now poised to reveal provocative new clues in the tantalizing quest for signs of water - and perhaps even life. (Closed Captioning)

Welcome to Mars - Take an astounding look at the Red Planet in an interplanetary adventure that begins with the white-knuckle landings of the Mars rovers Spirit and Opportunity, chronicles months of frustrating setbacks and elating discoveries, and captures the gripping drama and the breathtaking images of the most significant mission events. (Closed Captioning)

MARS Dead or Alive - Before it sent back its first spectacular images of the Martian landscape, Spirit was just one of the two rovers conceived in the $820 million Mars Exploration Rover (MER) project, developed at NASA's Jet Propulsion Laboratory in Pasadena, California. Join NOVA for a behind-the-scenes glimpse at this compelling story of technical ingenuity, emotional drama, and triumph. (Closed Captioning)

These DVDs features Descriptive Video for the Visually Impaired.

5 star rating 3 Reviews
3 Reviews
I
Imhal
Anonymous User
5.0 star rating
06/01/22
This is one super package
Review by Imhal on 06/01/22 review stating This is one super package
The only reason I rated this 5 star is it does not go any higher. The subject matter is of intense interest to me and it is cover so well here. The quality of the DVDs are also super. Anyone interested in space exploration needs to watch these.
Mars: The Red Planet, 4 Pack DVD
R
Robert
Verified Buyer
5.0 star rating
08/13/21
Interesting!
Review by Robert on 08/13/21 review stating Interesting!
Interesting!
Mars: The Red Planet, 4 Pack DVD
M
Microfog
Anonymous User
5.0 star rating
10/27/20
quaility dvd set
Review by Microfog on 10/27/20 review stating quaility dvd set
dvd set is great however like other order the shipment got stuck for some reason.Ordered 12/28 received Jan 15.Had to call twice to get order moving.Status kept showing a shipping lable has been created but that was it...
Mars: The Red Planet, 4 Pack DVD
Copyright © 2023 Public Broadcasting Service (PBS). All rights reserved.   PBS.org   PBS Mission   Privacy & Security   1-800-531-4727 1-833-565-0293