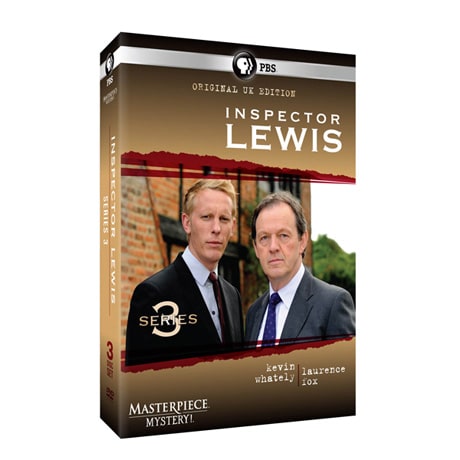 Inspector Robert Lewis (Kevin Whately) and his partner, the enigmatic Detective Sergeant James Hathaway (Laurence Fox), return to the idyllic Oxford countryside and Colleges in five new thrillers, forcing the pair to revisit the past - and to reconsider the future. Unedited, U.K. broadcast edition.

This series is the broadcast version.

Counter Culture Blues - Lewis is starstruck when he's sent out on a disturbing the peace call, only to come face to face with The Addiction, a rock and roll band from the '70s on its way to a comeback - thanks to the lead singer's (Joanna Lumley, Absolutely Fabulous) timely return from the dead.

The Dead of Winter - After wrapping up a gruesome case that leaves him shaken, Hathaway finds himself investigating a murder at Crevecoeur Estate, where he spent much of his childhood. Do his old playmates - including his first love - know more than they're letting on? And was the accidental shooting of Crevecoeur's Philip Coleman (Nathaniel Parker, The Inspector Lynley Mysteries) really an accident, or was it meant to be a distraction?

Your Sudden Death Question - Lewis and Hathaway find themselves up against a slick quizmaster (Alan Davies, Jonathan Creek) when the standout competitor at a private quiz weekend is killed before the competition even begins. But is competition the motive, or is it just a convenient cover to settle old scores?

Falling Darkness - Dr. Hobson finds herself caught up in a decades-old vendetta when one of her university friends is murdered, and another young student is killed in the house Hobson and her friends shared years ago. Obviously unable to act as the pathologist in the case, Hobson instead finds herself and her remaining friends - Dr. Ellen Jacoby and playboy Alec Giles (Rupert Graves, Sherlock) - suspects, and Lewis is forced to subject her to questioning.

"The Oxford-based series is beautifully filmed, and the music, composed by Barrington Pheloung, adds effectively to the mood and tone of the series." - Suite101 Blog.

"I just have to say that The Inspector Lewis Series on Masterpiece Mystery is some of the best television there is. Too bad it's on PBS and, therefore, has a relatively small following compared to, say, The Mentalist or Law and Order SUV... better writing, superior characters, lovely photography, considerably more depth, but the question is why can't American mystery dramas be more like the Inspector Lewis Masterpiece Mysteries on PBS? ... I wonder what would happen if Inspector Lewis and Sergeant Hathaway showed up on ABC?" - Stormy Malone's Column Blog.