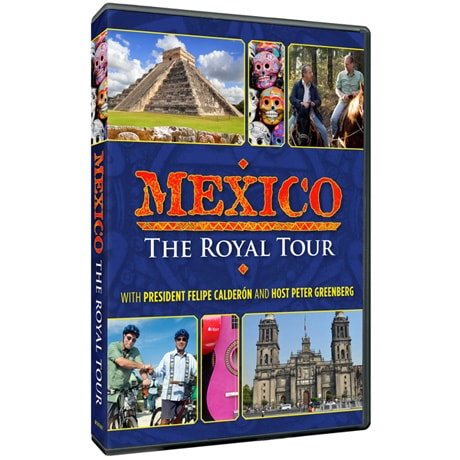 No Reviews Write the First Review
Item #: WB7332AV
Mexico: The Royal Tour is a groundbreaking special, produced and hosted by Peter Greenberg, that will showcase Mexico in a way no visitor has ever seen the country before - through the eyes of its leader.
No Longer Available

Mexico: The Royal Tour is a groundbreaking special, produced and hosted by Peter Greenberg, that will showcase Mexico in a way no visitor has ever seen the country before - through the eyes of its leader.

Peter Greenberg joins Mexican President Felipe Calderón, one of the world's most dynamic heads of state, to showcase Mexico in a way no visitor has ever seen the country before - through the eyes of its leader. This personal, fast-paced, non-stop adventure journeys deep inside Mexico to extraordinary, iconic spots and includes experiences that aren't found in any guidebook, but are still accessible to travelers.

From Los Pinos, the Mexican White House, to the President's hometown of Morelia, Greenberg and Calderón crisscross the country, including an up-close-and-personal exploration of the legendary ruins of lost civilizations to discover the ancient mysteries these sites have hidden for generations. From soaring across the skies in a hot air balloon for a bird's-eye view of Teotihuacan, to whale-watching in Baja California, to rappelling into a seemingly bottomless pit, the world's foremost travel journalist uncovers the essence of this captivating and complex nation with the President as his guide. This is not the Mexico of media headlines or the expected Mexico of travel brochures - this is the real Mexico of The Royal Tour®.

Travel Editor for CBS News, Peter Greenberg is a New York Times best-selling author and multiple Emmy Award®-winning investigative journalist and producer. He appears on CBS This Morning and the CBS Evening News with Scott Pelley, and in many publications, including AARP The Magazine, Men's Health, Parade, and Oprah.com.