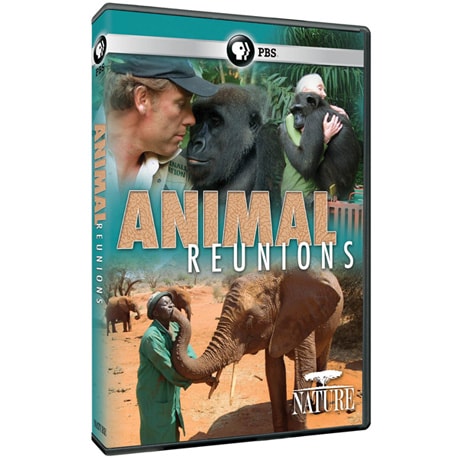 $24.99
2 Reviews Write a Review
Item #: WB7722
Animal Reunions have captured the imaginations of millions of people worldwide. YouTube is full of animal reunion stories - moments that illustrate and capture genuine affection and emotion between and   END_OF_DOCUMENT_TOKEN_TO_BE_REPLACED
Add to Wish List

9/11 Inside the Pentagon DVD

Animal Reunions have captured the imaginations of millions of people worldwide. YouTube is full of animal reunion stories - moments that illustrate and capture genuine affection and emotion between and among species. These rare moments provide a fleeting window into the emotional capacities of animals and their ability to form bonds with humans. But can wild animals really feel joy, devotion and love? Most animal lovers are convinced that they do, and now scientists are beginning to agree as we discover the stories that bring those animal emotions to life.
We meet orphaned elephants in Kenya who have learned to trust their nursery keepers even after they lost their families at the hand of man - and witness a deep bond revealed as the head keeper travels to the National Park to see if his fully grown elephants remember him. We meet Damian Aspinall, the first man to release a captive-bred family of gorillas back to the wild, and see his reunion with one of those gorillas, proving a bond that may last a lifetime. We also meet Jane Goodall, the legendary chimpanzee researcher who was once heavily criticized for her claims about animal emotions; and Rebeca Atencia, the veterinarian who runs a Congolese chimp sanctuary set up by Goodall, as she travels to find the orphan chimpanzee she raised and released back into the wild.
Through these incredible stories about human-animal relationships, illuminated by interviews with some of the world's most eminent ethologists and academics, this film sets out to question not only the emotional intelligence of animals but the so-called divide between us and them.

Due to limited US rights, this product is not available for shipping to Canada.