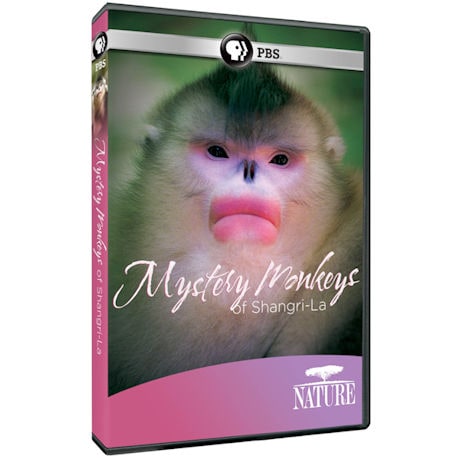 No Reviews Write the First Review
Item #: WB8072
NATURE: Mystery Monkeys of Shangri-La Hidden away in the Himalayas are beguiling monkeys unlike any others of their kind. Only recently discovered, Yunnan snub-nosed monkeys have mesmerizing faces, with   END_OF_DOCUMENT_TOKEN_TO_BE_REPLACED
Add to Wish List

Ken Burns: Cancer: The Emperor of All Maladies

Hidden away in the Himalayas are beguiling monkeys unlike any others of their kind. Only recently discovered, Yunnan snub-nosed monkeys have mesmerizing faces, with tiny noses, almond eyes and large pink lips that unavoidably call to mind the results of too much plastic surgery. Their elfin-like young have ears like Yoda. They are exclusive stars of their enchanted mountain valley, found not far from an ancient city named after the famous mythical paradise called Shangri-La. There are only a few thousand of them in the world.

Representing the meticulous and ambitious work of an all-Chinese film company led by award-winning filmmaker, Xi Zhinong, this spectacular film is the true story of one family of these monkeys, followed by an intrepid team of filmmakers, rangers and scientists for two years. At the heart of the story are two young monkeys, half-brothers, who make their way in the world by very different paths - one protected and indulged, the other mostly a neglected and adventurous survivor. Their family is watched over by a formidable fighter and his gang who guard a troop of composed of 8-10 families. It is a unique monkey society, formed in response to the hardships of the Himalayas, enduring those hardships with a mixture of kindness, violence, cooperation and interdependence.

Liberty's Kids: The New Frontier + Not Yet Begun to Fight DVD - AV Item

FRONTLINE: The Fish on my Plate DVD

NOVA: Mystery of the Megavolcano DVD